Steve Austin, astronaut. A man barely alive. Gentlemen, we can rebuild him. We have the technology. We have the capability to build the world's first bionic man. Steve Austin will be that man.
Better than he was before. Better stronger,faster.
Opening narration from the SIX MILLION DOLLAR MAN 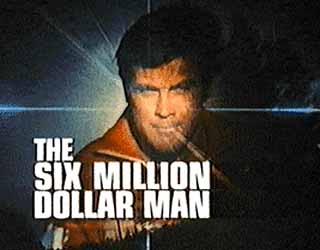 One of the most successful and bizarre science-fiction, television series of the 1970's was based, loosely, in science fact. ABC-TV's The SIX MILLION DOLLAR MAN was predicated on a novel called CYBORG, written by respected aviation, journalist Martin Cadin. Like the book, the series incorporated then-current research into cyber technology and human tissue regeneration. How that factual data was applied in the fictional storyline is where the broad fantasy came to play.

THE SIX MILLION DOLLAR MAN was produced by UNIVERSAL STUDIOS for ABC-TV, and aired from 1974-1978. It was the story of Astronaut Steve Austin, played by Lee Majors, who had achieved star status on ABC-TV's THE BIG VALLEY. Austin nearly dies in the crash of an experimental aircraft he was testing. A covert, government, espionage agency,called the Office of Scientific Intelligence, saves his life and implants high-tech, nuclear powered prosthetics to replace missing limbs, plus a miniature camera in the place of a damaged eye. In return, he became America's most effective, and most expensive ,secret agent. Before the series would end,Steve Austin would battle Russian spies, aliens and Sasquatch. 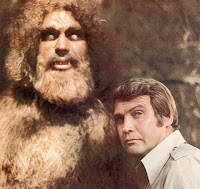 The show was a runaway hit for ABC-TV. In its third season, THE SIX MILLION DOLLAR MAN, along with CHARLIE'S ANGELS,HAPPY DAYS,PLUS LAVERNE & SHIRLEY helped to propel the ABC television network to first place in the national ratings for the first time in history.

The success of this show resulted in a spin-off series called THE BIONIC WOMAN starring Lindsay Wagner, as a tennis star, who suffered a catastrophic sky diving accident. Her character, Jamie Sommers,was rescued, bionically enhanced and deployed as an O.S.I. agent.

Millions of dollars in SIX MILLION DOLLAR MAN merchandise was sold and is now in demand as memorabilia. From lunchboxes to action figures, the show's youngest viewers wanted to show their loyalty to Steve Austin.

Below is a short montage of clips from THE SIX MILLION DOLLAR MAN, set to the serie's original. up-tempo, theme song, performed by 60's folk/rock icon, Dusty Springfield. ENJOY!!!!!