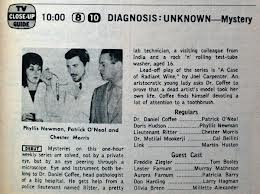 In the hopeful summer of 1960, CBS-TV traded the bright lights of a Broadway theater for the dimly lit recesses of a  pathologists lab, with surprising and entertaining results.

DIAGNOSIS: UNKNOWN was a B&W,CBS-TV mystery hour , that replaced Garry Moore's vibrant , NYC -based,variety show in the summer of 1960 and showcased Patrick O'Neal as a suave, urbane pathologist who solves crime by scientific method.

AS Dr. Daniel Coffee, O'Neal methodically navigated the byzantine clues that each case offered, while he engaged in badinage with  upper class suspects from New York society.

Bearded and attired in a white lab coat, Dr. Coffee was portrayed as a pungent blend of an idealistic  scientist and world-weary investigator.

Shot on videotape in NYC, at a time when most hour-long, crime dramas were shot on film in Los Angeles, it features early video performances by Tom Bosley and Larry Hagman, before they became two of the most famous faces and beloved leading men in television history.

You will also recognize some famous faces of fifties TV, like game show stalwart, Phyllis Newman and versatile character actor, Chester Morris. He played one of the medium's first and best crime fighters, when his BOSTON BLACKIE theatrical films came to the LATE SHOW  and  the LATE, LATE SHOW on local stations.

There were even some exterior elements shot on videotape  ,when the most portable of field  production systems filled a 1/2 ton truck.

The taught and stylish effort was directed by the legendary Fielder Cook.

From the SCREEN STAGE AND SONG YOU TUBE  site, here is DIAGNOSIS:UNKNOWN 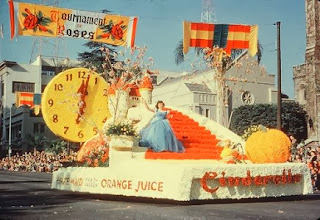 The F.C.C's ,  offer its approval of  the RCA/NBC system for compatible COLOR TELEVISION  on December 17, 1953 at 5:32 P.M, EST, which  allowed viewers with monochrome receivers to see the same shows as those with  COLOR sets( albeit in black & white ).

It was a perfect video vehicle to introduce the vital and vibrant technology to those few who already owned COLOR sets , those gathered to watch in  RCA viewing centers at hotels or retail outlets and those who aspired to bring color into their TV viewing routine. 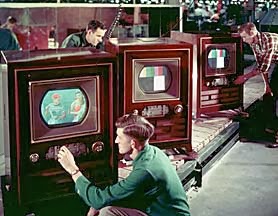 Above is an image of the RCA assembly line , constructing the model CT-100, the first generation of consumer, COLOR sets made by the electronics giant. It debuted on the market in April of 1954, to positive reviews and  at an initial cost of $1000.00, but quickly was discounted to $495.00 , in an effort to increase sales.

Here from the TV DAYS YOU TUBE SITE  and  THE KINESCOPE HD ARCHIVES  is a clip from the RCA Documentary, SIGHTSEEING THROUGH COLOR TELEVISION , which details the day that that America was introduced to COMPATIBLE  COLOR TELEVISION.