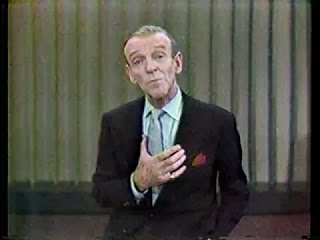 Network Television in 1960, occasionally, offered optimism and elegance among the endless array of cops and cowboys.

While weekly Prime Time took us to courtrooms and  crime scenes , the sheriff's office and the surgical suite, some special programming could meet the standards of excellence set by video visionaries like Frank Stanton and  Pat Weaver.

ABC offered the innovative, if  Kafka-esqe ,comedy of Ernie Kovacs.

But the apex of  television as an art form ,that year, was a vibrant, captivating  hour of song, dance, music and comedy in LIVING COLOR called , simply ,ASTAIRE TIME.

The sophisticated hour was the third and final installment in a trilogy of terpsichorean fun
starring and produced by the legendary star of stage, screen, radio and nightclubs,  Fred Astaire.

His first effort, 1958's AN EVENING WITH FRED ASTAIRE, won every major accolade and was the first musical program to be shot in filmic style and edited on  COLOR videotape.

The 1959 sequel , ANOTHER EVENING WITH FRED ASTAIRE was also celebrated by viewers , professionals and critics, alike.

It was directed  with a by iconic,  producer/director Greg Garrison, whose career credits include THE BUICK-BERLE SHOW and THE DEAN MARTIN SHOW.

Choreographer Hermes Pan , one of Astaire's favorite collaborators in cinema, brought a deft and sweeping look to dance numbers.

Here, from the AMPOPFILMS YOU TUBE site, is ASTAIRE TIME. 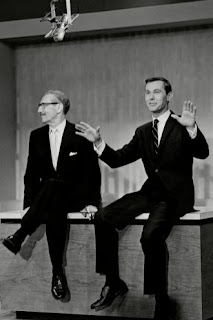 In the "swingin' sixties," the creative team at NBC's KRAFT MUSIC HALL decided to offer viewers something hipper than the than country-western balladeers, Broadway crooners and recipes for caramel apples that were a staple of the long running, high budget, weekly hour of music & comedy.

They struck a deal to bring a sanitized, but star-studded version of the FRIARS CLUB's off the record and off color "roasts" of the most famous and infamous names in show business.

In 1968, Johnny Carson, at the zenith of his TONIGHT SHOW career, and spending more time in divorce court  that most lawyers, was the target and one of his own  comic heroes: the one, the only Groucho Marx, took lethally funny aim.

From the BERNIE OWEN YOU TUBE site, here is an excerpt of THE FRIARS ROAST JOHNNY CARSON on  THE KRAFT MUSIC HALL. 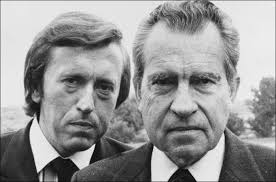 How many television professionals could effortlessly alternate between aggressively interviewing the  most interesting and powerful people on Earth and satirizing them in acerbically comic performances?

The late Sir David Frost did just that for almost six decades.

David Parradine Frost, the son of a Minister, was a Knight in his native England UK and  a true Citizen of the World.

He was in the second wave of Television broadcasters. Frost was one of those who learned their craft in front of  the camera as the medium evolved and matured, not behind the microphone in radio studios, as had their predecessors. His work resonated with British Baby Boomers, who were questioning the values and institutions that their parents saved in World War Two.

Frost forged a new genre in Television as the point man on the BBC's groundbreaking, comedy program, THAT WAS THE WEEK THAT WAS in the 1960's. He also hosted a subsequent, abortive, American version on NBC.  While the show was rejected, Frost was embraced by stateside audiences.

A charter member of the international Jet Set, in the 1970's , Frost personified the frequent flyer. He hosted a daily, syndicated  talk show for GROUP W BROADCASTING, based in New York, and actually commuted to the UK to star in a weekly interview program.

Like Playboy's Hugh Hefner, his most intimate, personal relationships made global headlines. He exemplified the MOD sensibilities of the immediate, post-MAD MEN era. He produced and hosted television shows in America, The UK and Australia. He also produced films and wrote books.

For this smart, savvy, multi-national, multi-media, multi-tasker, life, like television, was a global affair.

David Frost will best be remembered for eliciting a long-awaited apology for the Watergate affair from disgraced, former President Richard Nixon, during a landmark series of interviews he conducted with Mr. Nixon in 1976. That tense exchange was, itself, chronicled in a Broadway show and an Academy Award nominated film.

Frost began his storied career as a child of the burgeoning television generation and lived to be a respected, recognized elder statesman of international media.

Here, from ABC NEWS is David Muir with a remembrance of  Sir  David Frost. R.I.P.