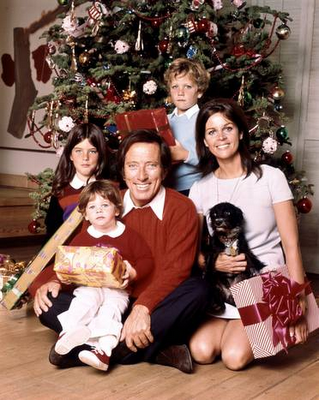 Once upon a Yuletide ,Johnny Carson,the now departed King of Late Night Television, once joked on NBC's TONIGHT SHOW, that you can tell it's Christmas-time in Hollywood, because the stars are all trying to get custody of their kids, so they can tape their Holiday Specials.

Funny and in some cases, true.

All three verstile and iconic performers hold an honored place in the video vault as Television legends.

But with the unfortunate passing of Andy Williams, some months back, there is likely to be a renewed interest in his vintage, holiday offerings.

THE ANDY WILLIAMS CHRISTMAS SPECIALS were vibrant,energetic, upbeat and nostalgic. A family favorite that showcased new arrangements of favorite tunes, wrapped in a snow-coated vision of Christmas-past.

Produced in vivid, LIVING COLOR at NBC's cavernous Burbank Stages, with intricate musical numbers, dynamic choreography and ,often,complex , studio-based,ice skating sequences, they were a welcome gift from the Peacock network to the Yuletide audience.

These classic episodes meet the test of time,garnering significant audience as a part of PBS pledge week programming, growing in DVD sales and warmly recalled as a television tradition.

Here, from the MUSICGUY64 YOU TUBE site, is a Holiday sampler from Andy Williams and company.

Posted by PAGEONE at 2:33 PM No comments:

FIGHTING THE "WACKIEST" WORLD WAR - MILITARY DRAM-EDY ON WACKIEST SHIP IN THE ARMY - NBC-TV - CIRCA OCTOBER 31,1965 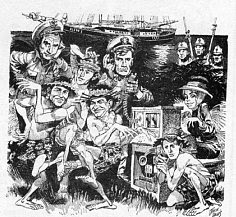 ( Cartoonist Drew Friedman's vision of the crew of the U.S.S KIWI for TV GUIDE, FALL 1965)


For the Greatest Generation and their Baby-Boomer progeny, it would appear that WORLD WAR TWO was the last, funny global conflict.

Ask Lt. Commander Quinton McHale or Col. Robert Hogan or the crew of the U.S.S. KIWI.

It must be a matter of perspective.

The mind compassionately dulls memories of muddy foxholes and vicous firefights after two decades, but the lights of a Brisbane street on a weekend pass must have burned bright in the recollection of veterans, some 20 years after the armistice.

In the Fall of 1965, NBC, then America's second place network, was about to launch a strategic battle plan designed to overpower its arch nemesis, CBS-TV.

This was the LIVING COLOR OFFENSIVE, and the tactics were impressive. The PEACOCK NETWORK would air all of it's Prime Time schedule with tinted video.

Each show selected for Fall debut had a rich and vibrant palate.

I SPY was shot in lush locations , like the streets of  Hong Kong and the beaches of Acapulco, around the globe.FLIPPER cavorted in glistening blue,Florida waters. BONANZA captured sprawling,Western vistas with  rich, movie-grade production values.

One of the shows that was supposed to play a key role in this armada of poly-chromatic programs was THE WACKIEST SHIP IN THE ARMY.

Based on a 1960 Jack Lemmon - Ricky Nelson movie of the same name, and produced for NBC-TV by the Screen Gems unit of Columbia Pictures, this hour-lonG "dram-edy" told the tale of the U.S.S. KIWI, a 70-year old schooner, pressed into military service in World War II as a spy-ship roaming the South Pacific. In the storyline,the decaying vessel was crewed by the Navy, but was actually an Army asset,hence the title. This premise, network and studio execs thought,would yield high adventure, light comedy and exotic locations.

The show had great DNA: Producer Harry Ackerman had shepparded the hit shows, BEWITCHED and HAZEL. Jack Warden, an accomplished and respected New York actor was the leading man, with affable support from TV perennial Gary Collins and the vastly talented Mike Kellin. The balance of the KIWI's crew was made-up of appealing young actors and even a few stand-up comedians.

But what appreared on NBC didn't live up to expectations.

The show was shot mostly on constrained, back-lot locations. The plotlines offered promise, but the execution was off-balance, so the mix of comedy and drama never really achieved an entertaining level of equilibrium.It appeared that comedy spots for the sailing stand-ups were peppered through the script with the subtlety of buckshot.

Like many war machines, THE WACKIEST SHIP IN THE ARMY, looked great on the drawing board, but it was a battlefield casualty, lasting only 29 episodes.

But, there is a lot to be said in behalf of this series.The show had an optimistic feeling and the players were appealing. It had an energetic pace and , of course, the acting was of  high caliber, given the tasks facing the cast.

It has not been seen in syndication for decades.

Here from the COUNTRYBOY 24564 YOU TUBE site, here is Episode number 7, STOWAWAY, with guest star Ruta Lee, of THE WACKIEST SHIP IN THE ARMY.