A LEGEND LOST - MADELYN PUGH DAVIS, WHO WROTE I LOVE LUCY, PASSES AWAY 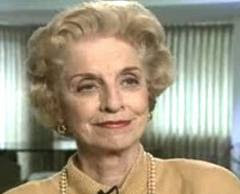 While it was rare to find a woman in the writer's room of early network, television programs, today,it is even more difficult to find a sitcom scribe of any gender who has skills commensurate with the manifold talents of the late, Madelyn Pugh Davis.

Sadly, Ms. Davis, who was one of the four, original writers on the landmark I LOVE LUCY series passed away at the age of 90 in her Bel-Air home.

CBS choose to transition the radio series to television in 1951, and after long negotiations, the Tiffany network allowed Ball's real-life husband, Desi Arnaz,to play her sitcom spouse. A multi-talented showman, Arnaz also served ,off-camera, as the executive producer.When Lucy and Desi formed DESILU PRODUCTIONS they brought Oppenheimer along as producer and then hired Carroll and Davis as staff writers.

Oppenheimer, Carrol and Ms. Davis wrote the pilot for the ground breaking series, which is still on the air , somewhere on this planet, almost every minute of the day.

It has been claimed that Ms. Davis tried many of the physical gags and stunts before putting them into the script for Lucy to perform. Ms. Davis and Bob Carroll wrote the first four of I LOVE LUCY'S six seasons on CBS-TV.

Ms Davis and her fellow writers won Emmy awards and other accolades,but perhaps the highest honor was the respect of their appreciative star. Whenever asked what made I LOVE LUCY so enduring and endearing, Ball would reply, "My writers."

Here, from the TVLEGENDS YOU TUBE Site is a brief interview with MS. Davis, explaining how she got her start as a television comedy writer. Enjoy!!!!

As a bonus, here is one the funniest moments from the early years of I LOVE LUCY,when Carroll and Davis were writing the show,the candy factory. Enjoy!!!

Posted by PAGEONE at 2:24 PM No comments: 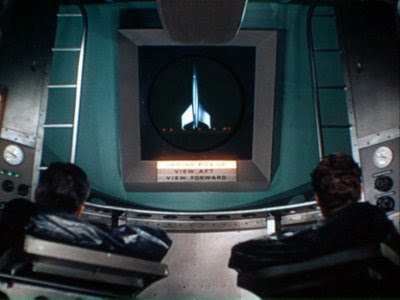 Here is a flashback to some classic 1950's Hollywood hoopla as CITY AT NIGHT, a talk/variety show that was produced LIVE on location by pioneering, Los Angeles television station KTLA, visits the set of producer George Pal's classic sci-fi movie-in-the-making, DESTINATION MOON.

KTLA-TV was launched in 1947 by Paramount Pictures and was guided by technical innovator and video visionary Klaus Landsberg. His efforts brought everything from an atomic blast in the Nevada desert to the Rose Parade to astonished and appreciative television viewers in Southern California. 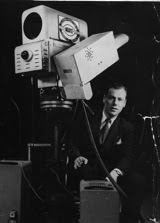 Today, KTLA is owned by Tribune and continues to develop engaging and entertaining, local content across a variety of media platforms.

In the clips below, from the CROWTROBOT 1313 YOU TUBE site, which constitute almost the entire program,you'll witness a complex,remote broadcast that many television stations might not even have been attempted in the medium's nascent stages.

On this night in 1950, multiple B&W cameras , including one on a crane,take the audience into the vast sets and the hosts meet with director ,designers,crew and cast members.


As a bonus , here is the original , theatrical trailer for DESTINATION MOON.Enjoy!!! 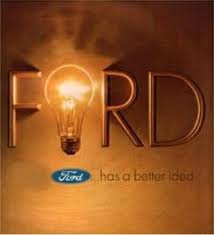 In the tumultuous sixties, Detroit car makers were the kings of the road.

The Motor City moguls, like Ford, GM and Chrysler, and their Madison Avenue advertising agencies, were as good at selling the promise of sex and youth to prospective buyers as they were at moving muscle cars off the lot and on to the American highway. 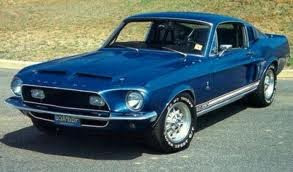 In the Fall of 1967, as this country faced convulsive social and political change, the Ford Motor Company rolled out the new, 1968 Mustang in a super-sized , 2 minute and 58 second commercial that delivered high octane laughs for viewers and high volume results for car dealers.

It was good time spot that diverted consumers attention from upheaval in the streets to horsepower in the driveway.


From the ROGUE SYRENE YOU TUBE site is a fast & funny ad that explains why ONLY MUSTANG MAKES IT HAPPEN. Enjoy!!!!! 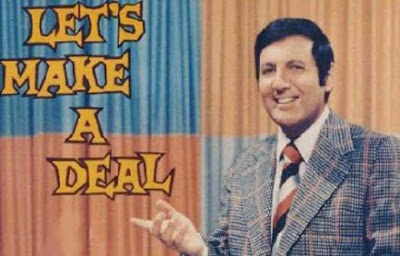 In the innocence of Spring 1963, months before fateful gunshots rang out in Dallas, forever changing America , an optimistic United States was reaching for the stars at Cape Canaveral.

The Kennedy White House was focused on the future, while confronting the challenges of the Civil Rights movement and growing concerns about the global spread of communism.

American families were enjoying an economic boom that brought unprecedented prosperity to the middle class. There was already a burgeoning generation of bargain-hunting, Baby-Boomers.

Then, a major television network and a genial , engaging, Canadian game show host were prepared to offer the women who comprised television's daytime audience the deals of a lifetime.

NBC-TV was looking to develop a new concept in an age-old, video genre, the game show. Entertainer and entrepreneur Monty Hall, with partner/producer Stefan Hatos, developed a program that gave studio audience members the chance to bargain for big-ticket goods, or to get Zonked and walk away with a bizarre consolation prize.

By the end of each show, the top winners traded their prizez for what was behind one of the 3 colorful doors during THE BIG DEAL OF THE DAY. They were at Monty's mercy and could drive away with a brand new car, or go home with a year's supply of M&M's. 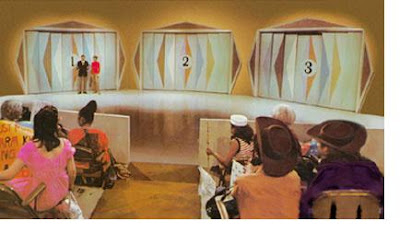 Here from the BLUELOBSTER YOU TUBE site ,and the GAME SHOW NETWORK, is the 1963 pilot episode of LET'S MAKE A DEAL STARRING MONTY HALL.

Shot at the Peacock Network's Burbank studios, alot of what you see in this episode grew to be bedrock of the long running show, which was on the NBC daytime schedule for over a decade before moving to ABC-TV. Many iterations of the format, including one produced for NBC with Billy Bush as host, have come and gone.

The latest, and most successful, revival/re-boot of the fast-paced game appears on CBS Daytime and is hosted by Wayne Brady. 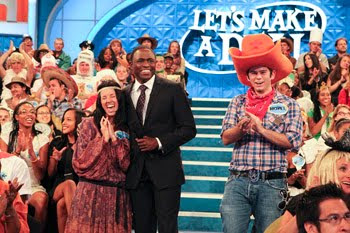 In the pilot, Hall was supported by legendary announcer Wendell Niles, who was later replaced by Jay Stewart. Music , as was the way in the nascent years of network television,was provided by a lone organist, the prolific Ivan Ditmars.Both Niles and Ditmars were veterans of Bob Barker's venerable TRUTH OR CONSEQUENCES, on NBC-TV. The enduring and instantly identifiable theme was written by Sheldon Allman. The pilot, like much of the series, was directed by Joe Behar.

Of course, model Carol Merill achieved iconic, pop culture status on LET'S MAKE A DEAL, blazing a path for Vanna White, Barker's Beauties and others to follow, who would coyly caress a Dodge Caravan or a Coleman Grill.

You'll notice that , in the pilot, potential traders and dealers came to the show in street clothes. Early in the series run, audience members started to arrive at the studio dressed in outlandish costumes and make-up, all designed to attract the attention of , as the announcer said every day,"TV's top trader, America's big dealer, Monty Hall!!!"

Posted by PAGEONE at 5:54 PM No comments: