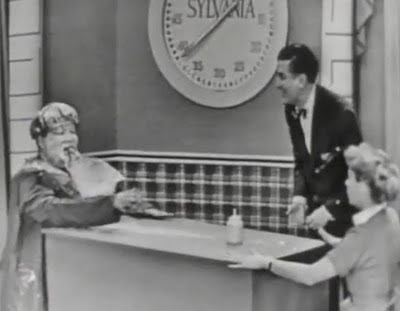 Can you outrun a ticking clock? Even with your spouse throwing pies in your face, while you try to carry 10 boxes of cupcakes on a moving treadmill?

Well you might have won a walloping $100 on a classic, Eisenhower-era, game show. 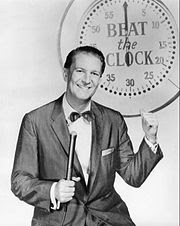 s high octane game show was a staple of the Tiffany Network's Saturday night schedule from 1951 until 1956. The eccentric fun-fest was so popular that The Great One , Jackie Gleason, satirized it on an episode of the iconic HONEYMOONERS.

Sponsored by Sylvania Electronics for five of it's six years on the network, the show helped bring new viewers to the nascent medium and even helped to sell them the sets with which to watch.

Labels: ON nbc'S minute to win it

Before we post more classic video from television's halcyon days, we 'll pause for these messages from our ... well... from two respected Philadelphia companies that have long histories sponsoring television and radio programs ,here, in the City of Brotherly Love.

These commercials appear to be from the the mid-to-late 1950's and were produced as LIVE elements of local programs on what was then WRCV-TV.For a decade WRCV-TV was Philadelphia's, NBC Owned and Operated Television station.NBC ran the television station, and it's AM radio outlet (which is now the mighty KYW NEWSRADIO 1060), from June of 1955 until a federally-mandated, station trade brought Group W's ownership and KYW-TV to Channel 3 in June of 1965.

Channel 3 has always been a kinetic place and an incubator of stellar talent. Video visionary ,Erine Kovacs, first stepped before a camera at what was then WPTZ-TV, for one of the mediums first wake-up shows, THREE TO GET READY. The hip, but wholesome MIKE DOUGLAS SHOW came to town with Group W. Jessica Savitch, David Brenner and Tom Snyder all honed their considerable skills at the station.

The featured announcer is a kind and talented man with whom I had the good fortune to work at KYW, Gary Geers. He was one of those multi-faceted gems of early local broadcasting, who hosted and produced newscasts, comedy shows, children's programs.

Gary also served as host and producer for one of this market's longest running shows, FARM ,HOME & GARDEN, which focused on regional agriculture. We worked together, last, in the 1990's , when he was the station's morning weathercaster and only remaining, in-house, staff announcer.

For decades Gary was the voice of KYW-TV, which, today, is a CBS O & O. He, sadly , passed away at age 84, just over a year ago. Gary and his kind of talent are sorely missed in local television, today.

Posted below from the TINNKAT YOU TUBE site, is a gauzy, monochromatic, video reminder of the contributions that staff announcers made to local television stations. The sponsors showcased here are a defunct, regional, financial institution, PNB Bank, and Philly's enduring, favorite, hometown snack, Tastykake.Enjoy!!!

Posted by PAGEONE at 5:40 PM No comments: 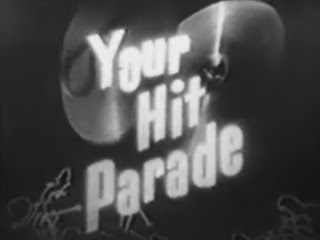 Before we all tracked trends on Twitter or Facebook, Americans turned to television and radio to find out what tunes were at the top of the charts and top of mind.

Before MTV showcased videos that gave form to the music we love, a LIVE television show produced elaborate musical numbers on expansive sets with innovative imagery to depict the nation's favorite songs.

YOUR HIT PARADE debuted on NBC radio in 1935, moved to NBC television in 1950 and ran successfully on the Peacock Network until it transitioned to CBS-TV for it's final season in 1958-1959.

With the formidable financial support of sponsor Lucky Strike Cigarettes, the full commitment of a powerful network, a versatile cast, an agile production team, and a sense of adventure that took the show LIVE from the confines of vaunted Studio 8H to far-flung, remote locales that included the Rockefeller Center Ice Rink and the Deck of the S.S.United States, the weekly musical revue of the nations most popular music was an enduring,viewer favorite.

For amazing insight into YOUR HIT PARADE,I suggest you get a copy of Andrew Lee Fielding's meticulous profile of the program, entitled THE LUCKY STRIKE PAPERS (check it out at bearmanormedia.com). Andrew had a front row seat to the sprawling show, since his late Mother, the multi-talented Sue Bennett, was one of the stars of the effervescent revue.

In all transparency, while Andrew was kind enough to send me a copy of his book, many months ago,I have no financial participation in the book. I am simply a fan.

Here, posted below, from THEFILMARCHIVE YOU TUBE site, is the December 24, 1955 episode of YOUR HIT PARADE. enjoy!!!!

In October of 1968, there was a confluence of comedy stars in NBC's cavernous,Brooklyn, New York studios.

That's when and where THE PEACOCK NETWORK'S durable and docile KRAFT MUSIC HALL attempted to bring the ribald fun of a Friar's Club roast to television.

Producers of the lavish, long-running,variety show had decided to fete the King of Late Night Television, Johnny Carson, in a family-friendly version of the profanity-laced, showbiz tributes.

The Friar's Club is a fraternity of entertainers whose boisterous bacchanals were always off-color and off the record.

The dais was adorned with some of the biggest names in comedy. Ed Sullivan, Steve Allen, Flip Wilson ,Don Rickles , Dick Cavett, New York Mayor,John V. Lindsay, and Carson's straight man for all seasons,Philadelphia's own, Ed McMahon were among the lambasting luminaries. Stand-up specialist Alan King served as roast-master. 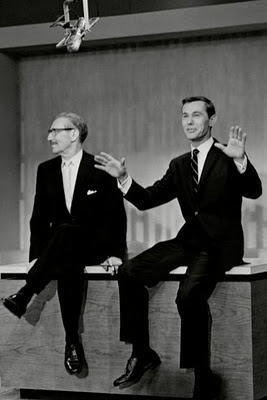 But, one comic contributor was in a class above and beyond all others. The iconic Groucho Marx brought a level of acerbic insult that yielded thunderous laughs.Marx had been Carson's first guest on the first TONIGHT SHOW he hosted in 1962. But Marx never let friendship stand-in the way of a punch-line.

Here , from the LAUGHVIDS YOU TUBE site, is Groucho Marx withering tribute to Johnny Carson on the October 23rd, 1968 episode of THE KRAFT MUSIC HALL.Enjoy!!!!

Posted by PAGEONE at 7:54 PM No comments: