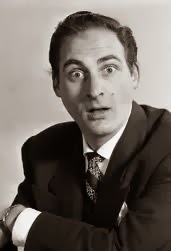 At the dawn of Television, Sid Caesar was ,both,  the infant mediums king of  sophisticated comedy and  its sovereign of  social satire.

Sadly, this week, so many of us  have come to praise Caesar , and as his Family must bury him.

His landmark  1950, NBC-TV series, YOUR SHOW OF SHOWS, stands some 64 years later as a much-heralded, truly hilarious example of Television at its best and its funniest.

If , in life, a person is known by the company they keep, Caesar's stellar reputation is buttressed by a renowned writing staff , that was early television's equivalent of the Algonquin Round Table.

Among those superlative comedic scribes who worked in the service of Caesar were Mel Brooks, Carl Reiner, Larry Gelbart, Woody Allen and Neil Simon.

The Writer's Room, which was housed at NYC's City Center, was Sid Caesar's cauldron of comedy.

A brass plaque, placed by the  TV LAND cable network, now  commemorates the comedic combustion that erupted inside those offices.

It was where young writers forged brilliant careers and life-long loyalty to the demanding, but nurturing boss.

It was survival of the funniest.

Because funny was all that mattered. 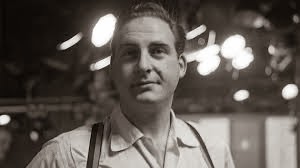 Sid Caesar was a master of multi-lingual double talk, had the timing of an atomic  clock and could bring life to  any character written by his stellar staff.

The only persona that he was reticent to portray in public was Sid Caesar. Like many comedians, he was riddled with doubt about himself, while confident and comfortable in any other role he essayed.

His first network series... 1949's ADMIRAL BROADWAY REVIEW, seen on  DUMONT AND NBC was cancelled for being too successful. The president of Admiral Corp., Russ Sirigusa, cancelled the show at the end of its first season. He told Caesar that the show was such a hit and helped to sell so many television sets, that Admiral could not keep pace with consumer demand,. It was either expand their manufacturing plant or cancel the show. He cancelled the show.

When the incomparable Sylvester "Pat" Weaver took over NBC-TV in 1950, he envisioned a Saturday night , comedy revue with music that would air LIVE from NYC, Weaver enlisted Caesar and producer Max Liebman to create what became YOUR SHOW OF SHOWS.

Caesar and Liebman had staged the kind of  topical, energetic Revues  that Weaver hoped to bring to NBC, and they had done it to excellent reviews and solid box office.

It was a contentious , but successful partnership. Caesar guided the comedy and Liebman supervised the television production and crafted the musical elements.

YOUR SHOW OF SHOWS did smart, penetrating satire that resonated with the first generation of television viewers.

Viewers who chose to stay home on Saturday Night.

The audience was, from 1948 to 1954, comprised of early adopters who were, Eastern ( as rapidly as it grew, it took time for TV to spread across America ), educated and affluent.

You see, the first RCA television sets were monochrome receivers with a giant 12 inch screen and cost almost $300.00 in 1950.

That was the price of a used Chevy for most Americans.

Caesar helped to grow the medium, cultivate the audience , and sell a lot of  Oldsmobile's ( his primary sponsor :) .

But Sid Caesar , the person and the performer, was more about comedy and culture than  cash and commerce.

This meant that while other TV comedians were doing video vaudeville, Caesar and his legion of  writers could target popular culture and spoof everything from America's burgeoning fascination with foreign films to the cryptic poetry of the Beat Generation,  to the emerging mores of post-WWII, suburban life.

A new, LIVE show was produced 39 weeks per year. The stress on the Star led him into a spiral of alcohol and prescription drug addiction that he successfully overcame.

For all that has been written about the halcyon times when Sid Caesar ruled Saturday night  TV, he required only two things of the material that his writers provided .

It had to be smart and funny.

Those are two traits that Sid Caesar also had in common with his writing staff and his audience.

Here , from the JAMES STEEBER YOU TUBE site, is one of Sid Caesar's earliest and most hilarious  , television performances. It's from 1949's ADMIRAL BROADWAY REVIEW .

It is the exuberant  story of a Five Dollar Date, as it is recalled from 1939 and the dour version of that night on the town as it would be repeated in 1949. 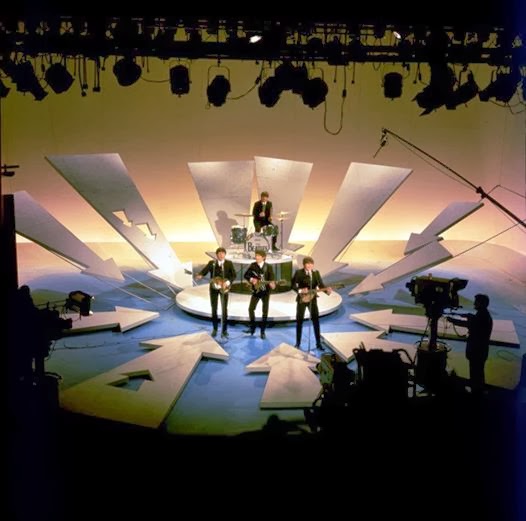 On a cold February night in 1964, a revolution in music erupted at New York's Ed Sullivan Theater.

This revolution was televised.

As a matter of fact, it was seen by millions of viewers, Coast to Coast on the CBS Television Network and in Canada, too.

THE ED SULLIVAN SHOW, originally christened as THE TOAST OF THE TOWN. was America's Video Vaudeville Theater from it's debut on the Tiffany Network in 1948 , right through it's finale in the early1970's.

While the host  of the eponymous Sullivan show was derided for being stoic and awkward on the air, Ed Sullivan was a Broadway Columnist who had an amazing, prescient, journalistic ability to identify talent that was headed to stardom.He was aggressive enough to ,often,book them on his stage before any competitor.

Americans tuned in each Sunday night to see singers, dancers, comedians, acrobats, ventriloquists, circus performers and so much more.

On February 9th, 1964, Ed Sullivan showed his audience the future and it was embodied by four lads from Liverpool, England , who changed Music forever : THE BEATLES

It was the first of three consecutive appearances on the top-rated, video variety show.

THE BEATLES were, as you know, and as history has proven, more than a fad. They altered the DNA of  Music for generations.

Imagine that you were also appearing as a performer on that vaunted episode, which was watched by more than 45%  of the American viewing audience.

The comedy team  and,  married duo ,of Mitzi McCall and Charlie Brill were booked to appear and perform their popular act, that night.

There could be no better showcase for the respected team that was seeking a bigger,  brighter spotlight.

Now, imagine that you were given the unenviable task of following THE BEATLES, that night.

That's exactly what happened to Mitzi McCall and Charlie Brill.

In this clip from the MOVIE MAGG YOU TUBE site, they  recount their tale of what happened when the followed the Four Mod Men who Rocked America!!!


As a bonus, from the Archive of American Television,
here is award-winning, Director/Producer John Moffitt recalls
that explosive night, when he was a Production Assistant on Sullivan's
"Really Big Show!!!"

Posted by PAGEONE at 3:23 PM No comments: