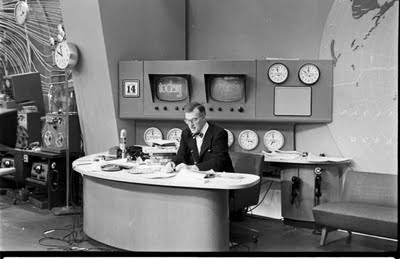 Time for a sentimental journey of sorts to 1951 and NBC-TV's production of CHESTERFIELD SOUND-OFF TIME. The show was a comic review starring the urbane comedian Fred Allen,who, in a laugh-laced exchange with erudite broadcaster Dave Garroway, promoted a brand new show on NBC that was to premiere in a few weeks on January 14, 1952.

It was called TODAY.

Garroway,an affable, subdued broadcaster from the quirky Chicago school of television, was the first host of the first daily,morning show in network television history.

The two hour wake-up call for television viewers was devised by video visionary Sylvester L . "Pat" Weaver, who lead the nascent NBC network in the early 1950's. While critics , both internal and external, decried Weaver's wild-eyed notion of people watching a television show ( or, at least, listening to it in radio style)during the early morning hours, Weaver saw value and virtue in the concept. Labeled by nay-sayers as "Weaver's Folly," he pushed forward and put TODAY on America's breakfast-time, media menu.

The pioneering Weaver also launched THE TONIGHT SHOW and WIDE WIDE WORLD, which was also hosted by the omnipresent, multi-talented Garroway .

Today will turn 60,next January. Now a four-hour programming block on NBC, with the first 3 hours hosted by Matt Lauer and Ann Curry, it continues to hold a respected place in American pop culture and in the history of American broadcasting. 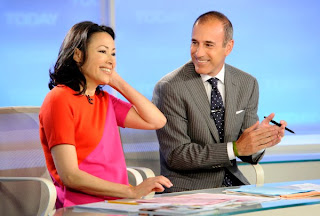 Here from the MR.JIMMYFINLAYSON YOU TUBE site is a short clip from the comic exchance between two titans of 1950's media.Enjoy!!!! 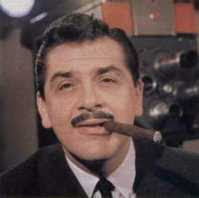 So much has been written in reflection of the late Ernie Kovacs' manifold, innovative contributions to television comedy, here and elsewhere, that at this point, you know I view him as an original video visionary.

Kovacs, who began his career in the early 1950's at Philadelphia's WPTZ-TV(now KYW-TV, AKA CBS3),like his comedic contemporary Steve Allen, used the primitive tools of pioneering television to construct multi-dimensional comedy that endures to this day.

Perhaps , it best just to watch this vibrant sequence of "blackouts" that I've posted below, from one of his many ABC-TV specials in the early 1960's.

With thanks to the Rolko52 YOU TUBE site, here is Ernie Kovacs' MACK THE KNIFE MONTAGE.Enjoy!!!! 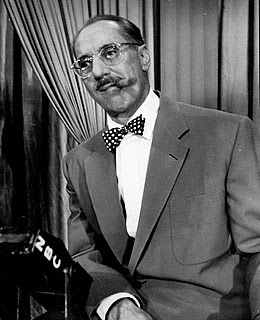 What happens when the irascible icon of American comedy , Grouch Marx, host of NBC-TV's fast and furious YOU BET YOUR LIFE pays a visit to the genteel and genial I'VE GOT A SECRET ON CBS-TV?

Groucho not only stridently smoked a cigar on a show sponsored by Winston cigarettes, defying a commercial convention that wasn't challenged in 1950's network television, but he scorched the segment with rapid-fire ad-libs that were tinged with acidic wit.

Here, from the CLASSIC VIDEO STREAM YOU TUBE site, is Groucho's guest spot on I'VE GOT A SECRET.Enjoy!!!!!