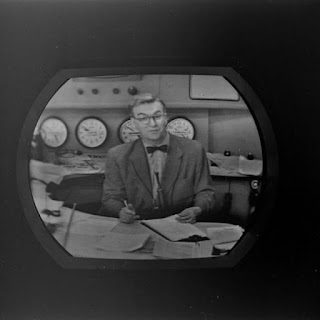 In the mid-1950's, when NBC-TV's TODAY was only a two hour show, produced in silvery monochrome,and musical concerts were performed in the claustrophobic, art-deco confines of ROCKEFELLER CENTER'S FLORIDA SHOWCASE, video visionary Dave Garroway and his production team welcomed a truly eclectic array of guest performers, every morning.

Following the mandate of media mastermind and NBC scion, Sylvester L. "Pat" Weaver,  TODAY not only brought immediacy to morning news coverage, but it gave America a crystalline window into the richly textured landscape of  arts and culture.

On June 22, 1956, Garroway welcomed Jazz Pianist Nellie Lutcher and her combo to TODAY, with a clever and expressive introduction.

Watch the classic clip, posted below and you'll  see the engaged, entertained on-lookers peering through NBC-TV's glass and brass window on the world.

From the MUSICOM67 YOU TUBE site, THIS IS TODAY, ON NBC. 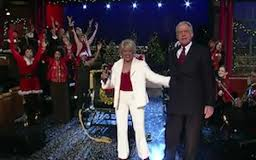 In the Yuletide landscape of network television, one of the truly anticipated, Holiday traditions is the incomparable Darlene Love's annual performance of CHRISTMAS ( BABY, PLEASE COME HOME) on CBS-TV's LATE SHOW WITH DAVID LETTERMAN.

It is one of most vibrant and electrifying moments of video that you can enjoy, all year long.

Love  has performed the Christmas standard on the Letterman show since 1986, when he was hostingLATE NIGHT WITH DAVID LETTERMAN on NBC. When a writers strike prevented her from performing on the show in 2007, an earlier version was aired. 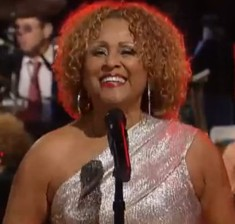 The  emotionally charged  song was written in 1963 by Jeff Barry, Ellie Greenwich and Phil Spector ( who is a whole other, less sentimental story, all onto himself). Love's vivid and intense rendition was released as part of a compilation album of Holiday tunes.

It has been part of the soundtrack of the Christmas season in America , ever since.

Here, from the 525WIREMAN YOU TUBE site, under the meticulous musical direction of  Paul Shaffer. is Darlene Love's 2012 , LIVE performance of CHRISTMAS ( BABY, PLEASE COME HOME).

Enjoy and Happy Holidays from KINESCOPEHD!!!

Here from the CHRISTMASjoy365 YOU TUBE site is Darlene Love's first performance of CHRISTMAS (BABY,PLEASE COME HOME) on NBC's LATE NIGHT WITH DAVID LETTERMAN in 1986. ENJOY!!!!

It was hazy and monochromatic with heavy static at the dawn of network television.

It was new , dangerous , addictive and available to the public at only a few places in 1951.

The demand outweighed the supply.

The price was off the charts.

Watch once and you never want to see the end of the broadcast day.

When a video viewer wanted a heavy dose of dramatized police procedure, they called Sgt.Joe Friday.

Friday was working the Prime Time Watch at NBC in Los Angeles.

He carried a badge.

With apologies to, and admiration for, pioneering video visionary and one of the original TV hyphenates, actor-director-producer-writer Jack Webb, we pay tribute to NBC's DRAGNET.

It was, by all accounts, television's first , hit crime drama.

DRAGNET was high caliber TV , in every sense of the term.

One of many successful series that transitioned from radio to television, the story telling was fast paced with clipped dialog. With images framed in tight close-up to compensate for the small screens of early,home receivers, it was photographed in a documentary style, that evoked film noir cinema.

Jack Webb's world weary Detective Friday was a heroic everyman who lived with his Mother. The laconic bachelor confronted the daily tedium of police administrative protocol, that was, once in every episode, punctuated by staccato bursts of danger.

DRAGNET  would run until 1959 and Webb would successfully revive the taught, but sometimes preachy, drama in LIVING COLOR for a second series on NBC-TV from 1966 to 1970, with the versatile, veteran character actor Harry Morgan as Friday's eccentric partner, Bill Gannon.

Here, from the PUBLICDOMAIN101 YOU TUBE site,  is the debut episode of DRAGNET, entitled THE HUMAN BOMB. 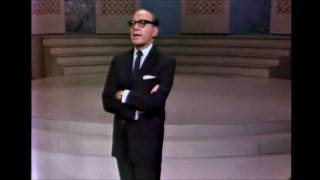 Chicago-born Benjamin Kubelsky was a violin virtuoso , a master comedian and a television pioneer.

Benjamin who, you ask?

Jack Benny was his stage name.

He was a celebrated and beloved comic presence in radio, vaudeville, films, nightclubs,theater , concert halls and, ultimately, on television.

If you read KINESCOPE HD,I will assume that you know enough to require only the cliff notes on the meticulous genius who cultivated loads of laughter from small, but sumptuous portions of nuanced comedy.

Jack Benny had timing that made the cesium clock at the US Naval Observatory jealous...on an hourly basis.

According to those who knew him, and have written long and well about him, Benny's on-stage persona of a vain, parsimonious, self-styled bon vivant and confiremd bachelor belied the warm, generous philanthropist and accomplished performer who loved music, comedy and the audience in almost equal measure.

Benny had the most popular radio program in America, in the late 1940's, when CBS Scion William Paley wrested him away from NBC.

The audience followed him around the radio dial.

Benny and his acclaimed writers are credited by many as having perfected the situation comedy format.

Every Sunday night, Americans tuned in as the self-involved cheapskate was assaulted by a comic cadre of eccentrics,who leveled a fusilade of foolishness upon him.

Plus a guest star of cosmic proportions joined Benny, each week, to add fuel to the funny.

He was among the first of the great radio performers to attempt television.

In 1950, Benny,seeing the value in video, agreed to do a regularly scheduled, television series on the Tiffany Network. 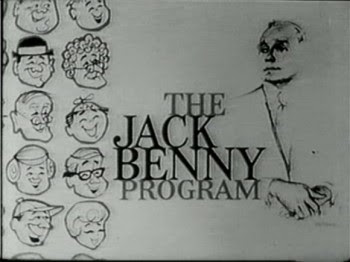 THE JACK BENNY PROGRAM was born.

The genteel performer wanted to appear only on a bi-weekly basis, guarding his surgically-honed material and concerned about blatant over-exposure, since he was still on radio , appearing in clubs and making feature films.

The revered performer was a mainstay of the CBS schedule from 1950 until 1964, when CBS cancelled him in cavalier fashion.

Benny went home to NBC for the 1964-65 season, sandwiched between his old friend,Bob Hope, and the volatile Jack Paar on Friday nights.

While the show was cancelled in one season, NBCexecutives ,wisely, knew the value of having Jack Benny on their air and signed him to do a few specials each season.

Jack Benny's place in the pantheon of television's greatest performers and as one of comedy's greatest practitioners is , in my estimation, unequivocal.

Here from THE GENERALARCHIVES YOU TUBE site, in LIVING COLOR and six parts is the December 1, 1966 JACK BENNY HOUR.

Posted by PAGEONE at 8:01 PM No comments: