02:56 UTC - THE MOMENT THAT THE WHOLE WORLD WATCHED HISTORY UNFOLD ON TELEVISION - THE MOON LANDING - ALMOST EVERY BROADCASTER ON EARTH - 7/20/69 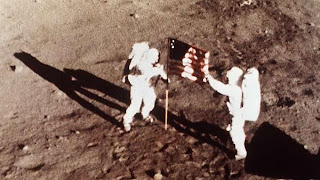 Tonight , billions of people around the globe will look up at the night sky and ,  perhaps, they will notice the Moon, glowing in among the stars.
A comparative fraction will stop to recall that on this date in 1969, at 10:56 PM EDT, 02:56 UTC, and 109420 into the mission of APOLLO 11, Commander Neil Armstrong descended the ladder from
The Lunar Module EAGLE to become the first human being in history to set foot on another celestial body.
It was the night that Americans walked on the Moon.
At that electrifying moment on that steamy summer night, 44 years ago, an estimated 600 million people  watched television in homes and churches and bars and union halls and in parks and on beaches. Television took us from the launch pad , to mission control , to the white house and to the Moon.
Video Viewers  who watched through the night, saw  the grainy, jittery images of Armstrong , who, sadly,  passed away in 2102  and  Lunar Module Pilot ,Buzz Aldrin ,on television as they surveyed the Sea of Tranquility. Aldrin called the Moon a place of "magnificent desolation."
The third member of the APOLLO 11 team, Command Module Pilot Michael Collins orbited the moon , as his partners walked it's surface. For a period, as he guided the ship around the dark side of Earth's only , natural satellite, he was out of communications contact with his colleagues and with NASA's Mission Control at the Johnson Space Center in Houston, Texas
In the hours that followed the amazing moonwalk, citizens of the world put aside their  political, religious and social differences to celebrate the realization of a dream as old as mankind.
I have not heard much on this 44th anniversary of this daring , dazzling accomplishment, which fulfilled the mandate of a martyred President .It was  John Kennedy who set the goal of putting a man on the moon  before end of the 1960's.The American Lunar landing all but ended the so-called RACE FOR SPACE, with , what was then the worlds only other Super Power, the Soviet Union.
Tonight, we should take a moment to honor those who walked the powdery lunar landscape, reflect on this superlative achievement and wonder when mankind can reach for its most noble dreams and the stars , again.
Here , from the ZELCO321 YOU TUBE site, is an excerpt of ABC NEWS coverage of this wondrous moment.
Enjoy!!! 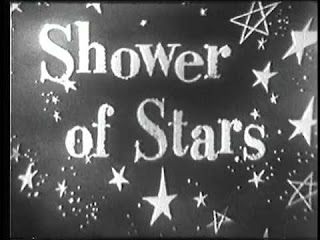 "FROM TELEVISION CITY IN HOLLYWOOD..." is one of the most familiar and famous phrases ever spoken on TV.

That simple, declarative statement has been a clarion call for CBS viewers since the Tiffany Network's Los Angeles Broadcast Facility opened its doors ... and the cavernous studios behind them ... in 1952.

One of the most prolific and proficient production centers in the history of the medium, TV City has been home to drama, comedy, sci-fi, music, soap operas, game shows , news , commercials and every other genre in video.

Even though CBS was vanquished by mortal rival NBC in the 1953 battle to set the technical standard in COLOR television, there was a time in the mid-1950's that CBS experimented with tinted TV, using RCA equipment.

At least two stages in the CBS complex at 7800 Beverly Boulevard in L.A's Fairfax section were outfitted with lumbering  RCA TK-41 Cameras and supplemental lighting equipment required for polychromatic  production.

A wide range of shows on the CBS schedule were produced at Television City in , what CBS branded as, FULL COLOR between 1954 and 1958.

In 1959, CBS scion William Paley decided that he would no longer spend his money buying equipment from  his long-time competitor, RCA/NBC's David Sarnoff.

CBS shut down regularly scheduled, COLOR programming until the Fall of 1966, when all three of America's major broadcast networks delivered their prime-time programs in COLOR.

But reflecting on the mid-fifties at CBS, CHRYSLER'S SHOWER OF STARS is a prime example of the CBS COLOR STRATEGY.

A monthly  mix of music, comedy and variety, usually hosted by the incomparable Jack Benny, it alternated with CHRYSLER'S CLIMAX, a series of suspenseful dramas and mysteries.

While both shows were produced LIVE at Television City, SHOWER OF STARS was offered as a CBS COLORCAST,  once a month.

Here from the SCREENSTAGEANDSONG YOU TUBE SITE , is a  warm and wholesome comedy, based on a Broadway hit. Jack Benny does his monthly start turn, with a versatile cast in TIME OUT FOR GINGER.