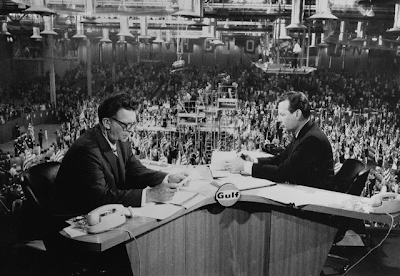 As we approach the 2012 Republican and Democratic national conventions, it's time for KINESCOPE HD TO offer a LIVING COLOR flashback to 1968's tumultuous, presidential election cycle.

America's so-called Summer of Love was also a super-charged season of anger, in a nation polarized by the divisive war in Viet Nam and turbulent social upheaval at home.

Poverty and drugs offered challenges that overwhelmed the middle class and elected officials.

President Johnson , pressured by the left and the Right about the war, choose not to seek reelection.

In the end, Republican Richard Nixon, who spent much of the 1960's as a political pariah, was elected in a landslide, defeating Johnson's Vice President, Democrat Hubert Humphrey.

There was a less volatile, but equally vibrant revolution going on in television, as the three major commercial networks of the era, prepared to cover the political conventions in Miami ( G.O.P. ) and Chicago ( Democrats ) in color for the very first time.

The Anchor Booths,built in each arena, which were occupied by NBC's Huntley & Brinkley, CBS's Walter Cronkite and ABC's Howard K. Smith would be constructed for the new, technical requirements of colorcasting, with added lighting and power demands.

This meant dramatic changes in the use of newly developed, highly portable technology to cover stories as they unfolded on the convention floor or on the streets of the host cities.

In the end, while the Republicans were confronted with significant protests, the Democrats confronted carnage in the streets, as police and demonstrators engaged in a bloody, protracted battle.The protestors shouted the refrain, THE WHOLE WORLD IS WATCHING over and over again. 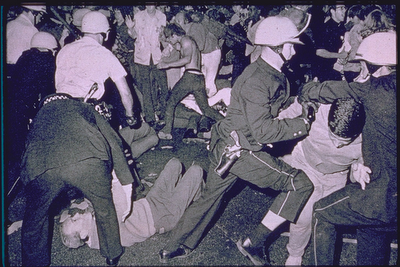 And thanks to nascent satellite distribution, viewers around the globe saw it all LIVE and in LIVING COLOR.

Here is a short clip that reflects the editorial vision and the production values at play in NBC NEWS. It features the Peacock Network's impressive , reporting team and showcases sponsor GULF OIL.


Posted below, from the TV DAYS YOU TUBE site, is a short video which , when paired with appropriate voice/over narrative, served as a promo and program opening for NBC News coverage of the 1968 DEMOCRATIC NATIONAL CONVENTION. 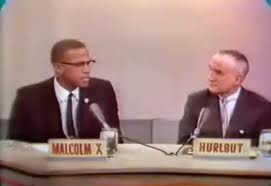 As Americans cope with the partisan, political division that has factionalized the country,perhaps it's illuminating to reflect on one of this country's most turbulent chapters: the 1960's.

It was a volatile time when the struggle for racial and gender equality at home, plus the expanding war in Southeast Asia divided the nation , even threatening to unravel the very fabric of American society.

At the time, Television news held up a high-buff mirror up to society, which allowed viewers to assess the challenges that confronted them every day.

One of the most controversial voices to emerge from the civil rights movement was that of Malcolm X, a Black Muslim Minister and activist.

The ANTIHOSTILE YOU TUBE SITE has unearthed a rare and penetrating 1963 interview with Malcolm X on a Chicago public affairs program, WMAQ-TV's CITY DESK.

Questioners include respected WMAQ-TV anchorman,Floyd Kalber,and Chicagoland broadcast legend, Len O'Connor, who was the editorial voice of the NBC Owned & Operated Television Station for many years.