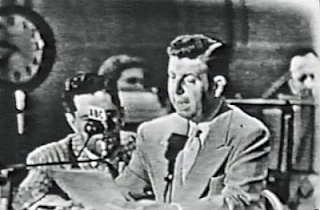 There were only a few scant years between the dawn of televsion and having television shows at dawn.

But, in 1948, a daring, multi-media  experiment yielded an historic first, when television brought breakfast-time radio from the kitchen into the liivng room.

Morning radio shows that launched the day for listeners with a familiy of players behind the mic, offering entertainment,news and weather were a broadcast mainstay in the 1930,40's and 50's. 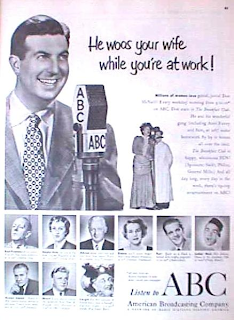 One of the most popular  programs was THE BREAKFAST CLUB WITH DON MCNEILL, originating from Chicago and beamed LIVE, each weekday at 8AM, on ,first, the NBC BLUE NETWORK, which later became the ABC RADIO NETWORK and subsequently on ABC's AMERICAN ENTERTAINMENT NETWORK,to millions of American homes.

In big cities and small towns, the happy mix of upbeat banter ,popular music and homespun humor was a welcome addition to the breakfast menu.

The richly mounted, wake-up call premiered on NBC BLUE in June 23, 1933 and ran contiuously , with McNeil hosting, through December 27, 1968.

But, four years before Televisionary Sylvester "Pat" Weaver devised and debuted TODAY on NBC-TV, on May 5th 1948, an experimental "simulcast," co-produced by ABC RADIO and the struggling DuMONT TELEVISION NETWORK, put Don McNeil's LIVE show on TV and Radio.

The show was being produced on location in Philadelphia because, both, the 1948 Republican and Democratic National Conventions were being held in America's cradle of liberty.

Here, from the JASON 1920 YOU TUBE SITE is a rare kinescope of that historic broadcast.