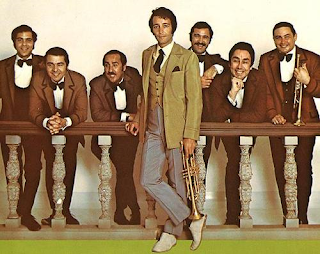 The soundtrack of American Life in the 1960's and 70's is replete with musical performers who weren't into hard rock ,heavy metal, the Mersey Beat, Motown, R&B or, even bubblegum music, which was kind of pre-fab, top forty.

Their upbeat, energetic offerings  were more like cotton candy and comprised "The Sound of Today."

These artists included Glen Campbell , Bobbie Gentry and one of the most beloved, super - groups of the time,Herb Alpert and the Tijuana Brass.

Most of these performers crossed over to star in television specials or series.

Herb Alpert and his band were at the top of the popular music charts when they teamed with the incomparable creative of
Gary Smith and Dwight Hemion, the pair who had first brought Barbara Streisand to television.

They made beautiful music...and television...together.

On April 24th 1967, Alpert & company starred in SINGER PRESENTS HERB ALPERT AND THE TIJUANA BRASS, in Color , on CBS-TV.

It features an amazing (given the technology of the time) , airborn, opening sequence in  in a ground-breaking musical special, that took color cameras and the talent out of the studio and  on location. It also wove a linear, comic narrative about the group and its history to bring a filmic quality to the storytelling.

The effort was rewarded with high ratings and 4 EMMY noinations.

Here is a monochome version of the entire show, including commercials for sponsor Singer Sewing Machines, thanks to the FRANK DRACMAN YOU TUBE site.

In the late 1950's and early 1960's Jack Paar was network television's avatar of angst.

As the second host of TONIGHT on NBC (following Steve Allen and preceding Johnny Carson), each weeknight. Paar convened the smartest cocktail party that anyone ever watched between their feet on a portable tv in the bedroom.

A career broadcaster, who bounced from announcing in local radio to acting in a short film career and a then on to become the first king of late night TV,
Paar lived by his wits , and worked on an emotional high-wire.

Urbane and erudite, he introduced some of America's brightest comedians to an appreciative audience.

Bill Cosby, Jonathan Winters, Woody Allen Allan Sherman and so many more were guests on TONIGHT and his NBC prime time hour, THE JACK PAAR SHOW.

Here, on the THE JACK PAAR SHOW, and from the STANDAPARTCOMEDY you tube site, is the deft and daft humor of Bob Newhart.