In the mid-1960's, Prime time Television was busily exposing secret agents. There was no real risk to national security since the super-spies who were forced from the shadows of clandestine service to the bright glare of TV lights were fictional favorites.There was no secret about the country's fascination with the classified capers of elegant, espionage agents. 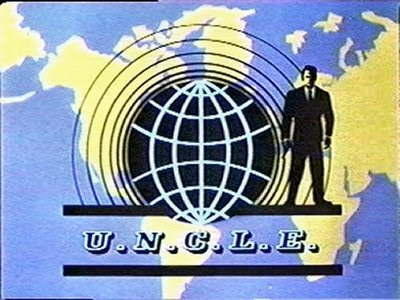 Inspired by the cinematic adventures of master-spy James Bond,and with a title character created by Bond author, Sir Ian Flemming, NBC-TV and MGM Studios launched THE MAN FROM U.N.C.L.E. in September of 1964. The satiric series, which debuted in black & white, then transitioned to LIVING COLOR in its second season, ran until January of 1968.


It all began with a pilot film called SOLO, starring Robert Vaughn in the lead role of urbane, espionage and enforcement agent, Napoleon Solo.

The color pilot set the premise that the talented Mr. Solo, his partner in covert ops, Illya Kuryakin, a Russian agent played by David McCallum, and an unsuspecting, civilian damsel of the week, who would be conscribed to save the day, join to fight off the forces of global evil in a high-buff, high voltage hour of fast-paced adventure . Veteran character actor, Leo G. Carroll played the professorial, station chief of U.N.C.L.E.'s sprawling but stealthy, New York headquarters.

THE MAN FROM U.N.C.L.E. proved to be a stylish, ironic, tongue-in-cheek spoof that developed a global, viewing audience and which still has a cult following.

Producer Sam Rolfe envisioned U.N.C.L.E., the united network command for law and enforcement, as a non-governmental , global security agency. Rolfe wanted to show cooperation across political and geographic lines in the battle between personal freedom and human oppression. At the height of the cold war , THE MAN FROM U.N.C.L.E., featured an American and Russian espionage team working together in pursuit of world security and global order.

The premise of the show had proven to be a bit complex for some viewers, so the clip posted below shows an expositional, prologue that was created and added to the start of early episodes, introducing the lead characters and explaining U.N.C.L.E., as a law enforcement agency.Enjoy!!!!!