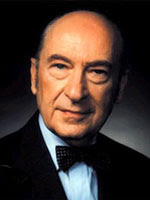 It was a simple phrase that was geographically, grammatically and journalistically correct. In form and structure, it conformed with the template for television reporters to identify themselves at the end of a field report.

Yet, it was ,somehow, distinctive. And , to me, sort of funny.

In the 1960's, I watched a balding man in a bow tie deliver that parting affirmation hundreds of times when I was a rare, adolescent viewer of THE HUNTLEY-BRINLEY REPORT, TODAY,countless network special reports and dozens of NBC News documentary programs.

As an American, religious mongrel ( Roman Catholic Mother and Jewish Father, GOD Rest Their Souls ) the comic irony of a seemingly,semetic someone named Levine reporting from the ecclesiastic epicenter of the Holy See always evoked a chuckle in me.

Tonight,on the way to dinner, my Blackberry vibrated as a friend sent that long-lost phrase from television's past... and my own youth ... to me as a message on Facebook.

Sadly, one line below was a link to Irving R.Levine's obituary. He died today,after a long battle with prostate cancer at age 86.

In the late 1980's, we would occasionally joke about Levine's lock-out from Vatican City in the newsroom at Philadelphia's WCAU-TV. Even as a middle-aged, Television News Director, a fleeting reference to the words ,"IRVING R.LEVINE, NBC NEWS, THE VATICAN..." brought a smile to my face.

But, for the record, there was nothing funny about his reporting. Levine was a serious newsperson who tackled stories of consequence and delivered them with eleoquence.

Levine earned his journalistic gravitas the old fashioned way. A protean combination of meticulous research,expressive writing, ethical reporting, and an unequivocal devotion to the facts shaped his stories and his reputation.

He distinguished himself for 45 years as an NBC News correspondent, with insightful reporting from a dazzling and eclectic array of global datelines. Starting with the network in 1950, Levine took NBC television viewers to the front-lines at the height of the Korean War and to the back streets of Moscow at the depths of the cold War.Levine was the first American television reporter to be stationed in the former Soviet Union. From Russia , he brought the curious Amercian audience textured stories of the arduous,onerous lives of sacrifice and scarcity that the Soviet people lived under communist rule.

In 1971, after years of reporting overseas, Levine came stateside and was assigned to become NBC's first economic correspondent.In an era before sophisticated, computer graphic systems were available to help visualize the intricate concepts on which he had to report, Levine provided linear context so viewers could make sense of daily developments in the economy.

Levine retired from NBC News in 1995 to join Lynn College as dean of the college of international communication.

The lessons of his journalistic career and his professional integrity should be taught in classrooms and newsrooms for years to come.

Below is a clip from tonight's NBC NIGHTLY NEWS WITH BRIAN WILLIAMS remembering the manifold contributions and lasting impact of Irving R. Levine on the news division he helped shape. Enjoy!!!!!

Visit msnbc.com for Breaking News, World News, and News about the Economy

Below is a clip from NBC News featuring an extended interview that Tom Brokaw conducted with Levine on the occasion of his retirement from the peacock network in 1995. Enjoy!!!!!

Visit msnbc.com for Breaking News, World News, and News about the Economy