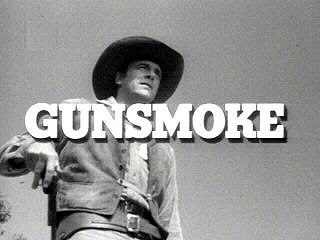 In 1955, CBS television wanted to bring adult stories about the rugged, daring men and women who settled and built the American West to Prime Time television. The airwaves were home to every kind of traditional cowboy from Roy Rogers to Gene Autry. They tracked down the bad guys, sang a song and rode into the sunset on a mighty steed. Children loved these homespun heroes. But programmers at the Tiffany Network felt it was time to produce a western drama that parents could enjoy.

They turned to their colleagues at CBS Radio and adapted the long-running hit GUNSMOKE as a television pilot film. They tested and rejected, the leading man from the radio series , William Conrad. Yes, the same one who went on to success as TV's most corpulent cop for hire , Frank Cannon. He had the presence, but the not the physique to play Marshall Matt Dillon on television.

Next,the network turned to the most accomplished and bankable western star in film history, John Wayne.His reputation was a portrait in celluloid and sagebrush.Duke Wayne was America's consummate cowboy.CBS thought he could bring new viewers to the Prime Time prairie.

He was at the pinnacle of a storied film career, and respectfully declined.But the Duke saw potential in GUNSMOKE and similarly, saw promise in a young colleague , who co-starred with him in a film called Big Jim McLean.

The Duke told CBS executives that he knew the right actor for the role of Matt Dillon. John Wayne may just be the most successful matchmaker in television history. While young James Arness needed some convincing from Wayne to accept the role of Dodge City's heroic and headstrong Marshall Dillon, GUNSMOKE ran for 20 years on CBS-TV and to this day in syndication around the world.

As a favor to CBS, Wayne introduced the debut episode of GUNSMOKE on September 10, 1955. That clip is posted below Enjoy!!!