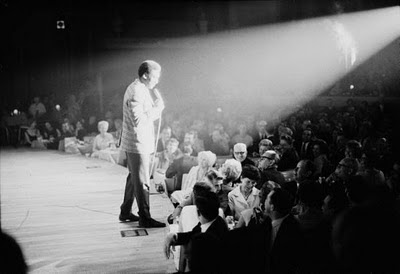 Bill Cosby was more than a monologist.He was, and still is, a master storyteller.

A deft wordsmith weaving daft imagery for an appreciative audience that was convulsed by his every comic concept.

The pride of North Philadelphia, a committed educator,an unrelenting social critic, and a benevolent philanthropist, Dr. William H. Cosby Jr. was,seemingly,born to carry on a tradition as old as fire. The role of village observer. The keeper of a comic chronicle that detailed the absurdity in life, through an ironic filter.

In the mid-1960's, the former Temple athlete was emerging as America's crown price of comedy and an icon of television.

His hit record albums and appearances on almost every comedy,variety or talk show made him a hot property and a household name.

NBC and uber-producer Sheldon Leonard cast him ,with Robert Culp, in the landmark adventure series, I SPY.

In that show, Cosby became the first African-American cast as a lead actor in a network television series.

Emmy awards, untold honors and the incomparableCOSBY SHOW were still in the offing.

Posted below, from the KANEDA83 YOU TUBE site is a December 11, 1965 appearance the Cosby made on ABC-TV's signature variety show, THE HOLLYWOOD PALACE.

It is Bill Cosby in his element.

One man, one microphone and one spotlight, standing center stage, with all the cameras and every eye in the studio focused on the smart, funny, fascinating fellow from Philly, Enjoy!!!! 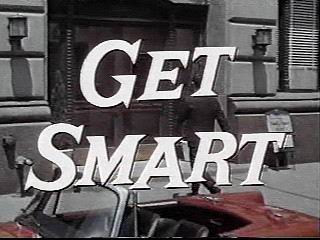 What happens when you mix the exuberant,comedic lunacy of Mel Brooks with the sly, ironic sensibilities of Buck Henry, then add an accomplished, stand-up comedian like Don Adams and the aquiline beauty of Barbara Feldon? But wait, you still have to blend-in rapid-fire dialogue, high-quality production values,a memorable theme song and a fusillade of comic catch phrases that captivated a nation.

What do you get?

It was the hit, sixties spy spoof that left secret agents Bond, Flint and Solo out in the cold. Each week on NBC-TV ( and subsequently on CBS-TV), CONTROL Agent 86, Maxwell Smart, along with his favorite partner in espionage, the lovely Agent 99, and his exasperated Chief, saved the world from the villains,tyrants,and thugs who ran KAOS, a criminal cabal bent on global domination.

Here from the SNEAKY GUY 55 YOU TUBE site, is the pilot for GET SMART, which aired in Black & White on the PEACOCK Network on September 18, 1965. Enjoy!!!! 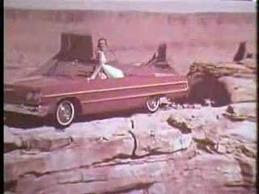 For viewers of NBC's, top-rated, Western drama, BONANZA, on a Sunday night in 1964, the most electrifying action sequence may actually have been in a commercial from the show's long-time sponsor, the Chevrolet Division of General Motors.

Clearly , there a backstory to this ground-breaking advertisement.

In the 1950's ,60's and 70's,network television and the automotive industry were dominated by their respective "BIG THREE."

In American living rooms, NBC, CBS AND ABC were the only true options for video viewers seeking the best in comedy, variety ,drama, news,sports and more.

In new car showrooms across the USA, General Motors, Ford and Chrysler were the preference of drivers seeking chrome-clad, high-performance, dream machines.

Those were truly halcyon days for two great,American industries that have confronted hard, economic times in the ensuing decades.

Here is a flashback to an epic commercial introducing the brand new, 1964 Chevrolet Impala, which also revolutionized television advertising. You will see spectacular imagery that was accomplished by a single , helicopter-mounted camera and without the contemporary benefit of computer generated graphics.

The woman you will see perched in the gleaming new convertible is a stunt specialist, who may bears a great similarity to Chevy's smooching spokeswoman of that time, singer Dinah Shore.

On the day after this ad premiered, people across America wanted to know how they captured the vivid and daring images that distinguished this commercial.

From the US AUTO INDUSTRY YOU TUBE site,here is a 2:00 minute commercial that opened new vistas for viewers and new creative options for real-life Mad Men. Enjoy!!!


As a bonus, here . also from the US AUTO INDUSTRY WEB SITE is a 1961 commercial that offers a musical introduction to the new, 1961 Chevrolet car line from the floor of the Detroit auto Show and featuring the effervescent and energetic Dinah Shore. Enjoy!!! 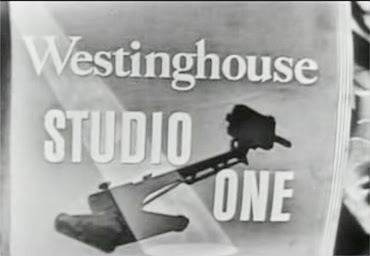 In what has been exalted as Television's Golden Age of LIVE drama, one weekly program was celebrated as the platinum standard in compelling, dramatic anthology:

WESTINGHOUSE STUDIO ONE on the CBS Television Network.

Airing LIVE, first, from the CBS studios in New York City, and later from CBS Television City in Hollywood, on Monday nights at 10PM Eastern Time, WESTINGHOUSE STUDIO ONE was the proving ground for a generation of electrifying young New York actors,writers, directors and producers.

Established guest stars brought stagecraft and considerable publicity to the award winning hour, which was rich with early television's most opulent production values, thanks to the sponsor support of a high ticket industrial conglomerate.

But, above all, for 10 seasons, from 1948 to 1958, on the Tiffany Network, this program was a crucible in which powerful, enduring stories were forged. WESTINGHOUSE STUDIO ONE brought home the full dimension of theater to television viewers, each week.

One of the series most honored and respected original efforts was playwright Reginald Rose's searing look at the thin line of logic and tolerance which separates a jury of reasonable citizens from becoming a racist lynch mob in 12 ANGRY MEN. 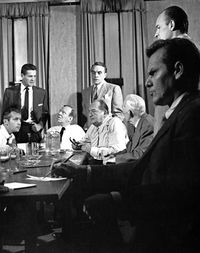 The raw and realistic story has resonated with audiences for decades. It was produced as a theatrical film starring Henry Fonda,Lee J. Cobb and E.G. Marshall in 1957.

Cable channel, SHOWTIME,produced a 1997 version that was headlined by Jack Lemmon,George C. Scott and Hume Cronyn.

The video posted was thought to be lost for over 50 years, until it was discovered in a private collectors home in 2003.

Here, from the CANTABRIDIGIAN YOU TUBE site, in one 50 minute, 42 second clip is the entire production of 12 ANGRY MEN from WESTINGHOUSE STUDIO ONE. Enjoy!!!!