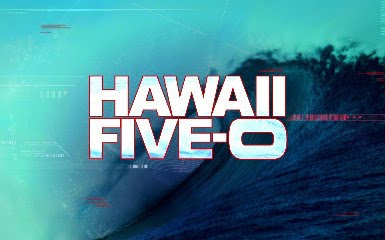 From pulsating percussion to blasting brass, there are few television soundtracks that offer the instant recognition or evoke the kind of exuberant, viewer response as the vibrant theme for HAWAII FIVE-O.You might think that an attractive,agile cast, on-screen chemistry, taut scripts, vivid video and lush locations would be enough to bring most viewers to their televisions. You might consider that the proven premise of daring cops taking down brazen villains in a tropical paradise might be sufficient.

Not without that song.

The original series debuted on CBS-TV in the fall of 1968, and the dynamic, complex title sequence, designed by director Reza S. Badiyi, was heralded by a high voltage, high velocity musical score, written by the respected film and television composer and arranger, Morton Stevens. 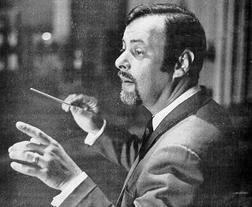 When FIVE-O's flinty Steve McGarrett and his cadre of island crime fighters first began busting bad guys, a rock group called The Ventures had a top 40 hit with a guitar powered cover of the show's supersonic theme.

Twice, since HAWAII FIVE-O ended it's original run in 1980, the Tiffany Network has tried to revive and relaunch the franchise.But, no matter how plot lines, producers or players changed ,in both instances, CBS-TV, and loyal fans insisted that Steven's iconic theme song be retained and respected. 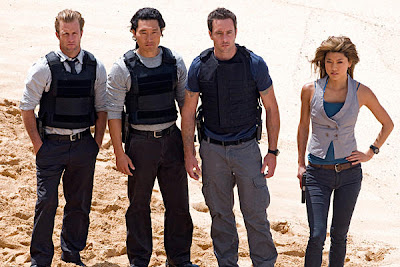 ( THE NEW CAST OF HAWAII FIVE-O)

This fall, when a new cast and crew hit the beach in Honolulu, the familiar and welcome theme was being reworked and updated on a music recording stage in Burbank.

Here from the WATCHHAWAIIFIVEO YOU TUBE site is a backstage look at that scoring session, mixed with video from the 2010 reboot of the CBS series.Enjoy!!!!!


As a bonus, here, from THEFUSIONCOMICS YOU TUBE site, is HAWAII FIVE-O's Co-Executive Producer, Alex Kurtzman,talking about the musical score at COMIC CON 2010, and presenting the above music video.Enjoy!!!! 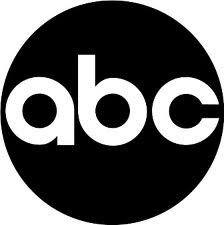 In 1961, the youth oriented, alphabet network even added the mature presence of John Cameron Swayze,former anchor of NBC's Camel News Caravan, one of the mediums earliest national newscasts, and future pitchman for Timex watches.

Traditionally viewed as half a network , because it had fewer affiliates and fewer hit shows than the Peacock or Tiffany networks, ABC also had the smallest news division with the fewest employees and the least available resources.In 1960, the patriarch of the company,Leonard Goldenson, made a modest investment in the news division, which, in turn, mounted four daily, national newscasts and fortified it's promotion.

It would take years of experimentation, effort and the manifold talents of journalistic televisionary Roone Arledge, before ABC NEWS became America's leading broadcast news organization in the late 1980's.That positon has long since been surrendered to NBC NEWS.

Here, from the ROGERSHARPARCHIVES YOU TUBE site, is a bombastic blurb exolling the virtues of ABC NEWS.Enjoy!!!!!! 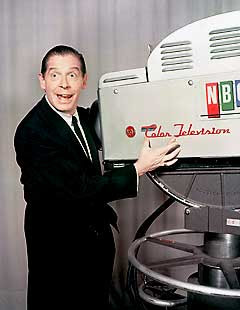 It's hard to imagine how many words have been written and spoken about comic-virtuoso and video icon, Milton Berle, since that warm, June night in 1948 , when the former vaudeville star stepped through the curtain ,under the scorching lights of studio 6-B and into the homes of those fortunate few who could afford home receivers to become Mr. Television.

There was only one Uncle Milty.

You know the legend: That his Tuesday night NBC-TV show, THE TEXACO STAR THEATER, often had 80 to 90 per cent of all available viewers watching. That during his commercials,big city water departments could see changes in pressure as all of those viewers flushed their toilets and got back to see what Berle would do next. He was the first verifiable television star, predating video victories by Lucy, Gleason,Godfrey and ,even, Howdy Doody.

As the competition grew, ratings diminished and as his style of slapstick comedy wore thin, Texaco cancelled its sponsorship. Buick sped in to underwrite Uncle Milty in a one hour, weekly, musical/comedy review on NBC, airing Tuesday at 8pm.But,after 3 seasons, THE BUICK-BERLE SHOW came to an abrupt stop in 1955.The Peacock Network had Berle under a 30 year , exclusive contract, so it installed him in a more traditional variety show in 1956,that lasted only one season. 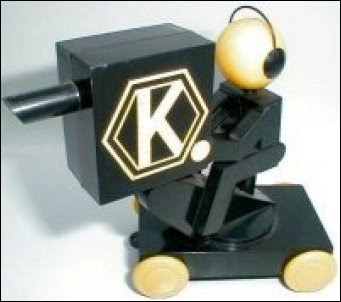 But, there was a Kraft Recipe for TV success , waiting in the wings at NBC in Burbank.Here it is:Take one part Ham (Uncle Milty) and America's biggest Cheese factory(Kraft Foods).Next, add guest stars, topical monologues,contemporary music and bake under hot studio lights.

What they got was the two seasons of THE KRAFT MUSIC HALL STARRING MILTON BERLE that aired in 1958 and 1959 on NBC-TV. In the end, Berle couldn't find a new audience for his more mature style of humor. He was cancelled and Kraft, in turn, began a long association with another NBC luminary, Perry Como.

Berle next did a bowling show for NBC. It lasted only one year.

Here , below, are three clips that are derived from the high octane,high jinks that Milton Berle delivered every time the red light went on.Enjoy!!!!!

Posted by PAGEONE at 7:30 PM No comments: 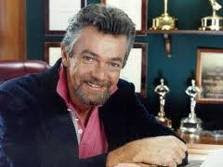 What do B.A. BARRACUS, JIM ROCKFORD & TONY BARRETTA have in common, besides their tireless devotion to take down the bad guys,each week, in 57minutes and 28 seconds or less?

These chimerical crime fighters , and dozens more TV tough guys, were created and developed by prolific, protean television writer/producer Stephen J. Cannell.The facile and formidable Cannell died in his Pasadena home on October 1st, at age 69,as a result of complications from melanoma.

A video visionary who had the unique ability to cultivate the human and vaunerable side of the characters he crafted , Cannell created, wrote and produced THE A-TEAM,WISEGUY,THE GREATEST AMERICAN HERO,RIPTIDE, HUNTER, 21JUMP STREET, THE COMMISH, SILK STALKINGS,BARETTA and even won an EMMY AWARD for his work THE ROCKFORD FILES. He was a guiding force in the production of the recent A-TEAM movie.He got his start writing on UNIVERSAL's stable of classic caper shows like, Robert Wagner's stylish,ABC-TV spy series, IT TAKES A THIEF.

He was was often referred in the media to as a TV Mogul, but always preferred to be known as a writer, first. The son of a successful businessman, Cannell overcame dyslexia to launch and manage one of the medium's most successful production companies.

In 2008, he told an interviewer that he still wrote on an IBM Selectric Typewriter, because his dyslexia was so pronounced, that his many misspelled words rendered his computer's "spell check" feature useless.

Stephen J. Cannell leaves a legacy of dignity, decency and a portfolio of engaging, entertaining television shows, novels and films.It is an impressive achievement.

Here is an excerpt from his recent interview with THE ARCHIVE OF AMERICAN TELEVISION, posted on YOU TUBE. Here , he offers sage advice for aspiring writers.


Cannell explains the origins of his company's distinctive logo.

Here is the final iteration of that logo, from 1999.