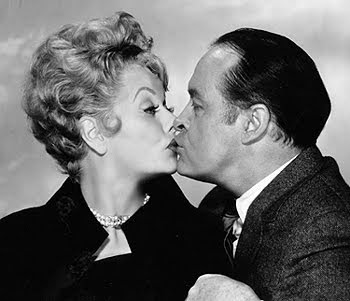 In the fall of 1956, comic icon Bob Hope returned to NBC for a new season of Sunday night, comedy/variety specials, sponsored by General Motor's Chevrolet Division.

This was a much anticipated event and not just because Hope was a beloved performer, who earned the affection and respect of a generation of Americans, that he entertained in the face of the Great Depression and World War II.

On this night, Hope, for decades the biggest variety star on television, would welcome the greatest star in situation comedy, Lucille Ball.

Reciprocating for a guest appearance that Hope made on CBS-TV's I LOVE LUCY, Lucille Ball and Desi Arnaz made their NBC-TV debut performing on THE BOB HOPE CHEVY SHOW.

As you'll see in the clips posted, below, from the RAMBO53915 YOU TUBE site, Lucy and Bob played in a sketch that spoofed Ball& Arnaz's, top-rated I LOVE LUCY. The scene features Hope as Ricky Ricardo, plus Vivian Vance and Bill Frawley. It was produced with meticulous attention to every detail of the hit sitcom from the Tiffany Network.

As for Ball and Hope,the popular pair of jokers had worked together on film, radio and television.Their on screen chemistry was electric.

In the meantime, enjoy this confluence of comic genius on a Burbank soundstage.!!!

BONUS CLIP FROM THE MINNOWTRAPPERMD YOU TUBE SITE

THE I LOVE LUCY SKETCH IN COLOR.ENJOY!!!!

Posted by PAGEONE at 9:53 PM No comments: 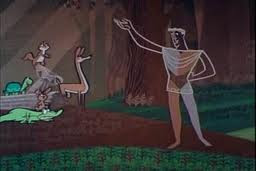 Long before PBS or it's precursor, NET, ever flickered on a 21 inch, Black & White Motorola console TV in the family room, commercial television networks and local stations took their obligation to inform and enlighten their youngest and most impressionable viewers quite seriously.

Even if the smartest programming with which they educated the tots in front of the tube was somewhat whimsical.

That's not to say that all tv aimed at toddlers offered classroom instruction by way of a cathode ray tube.

Each of those offerings brought with it a sponsor, determined to connect with vid-kids, even if it meant spending extravagantly on content and commercials.When it came to advertising revenue, children's television was grown-up business.

But, in the 1950's, as television was in it's adolescence, and long before the deregulation of media ownership in the 1980's and 1990's, the Federal Communications Commission required that television and radio stations regularly provide content aimed at enriching the lives of young viewers.

The admonition to carry this programming was stringently enforced, locally and nationally. 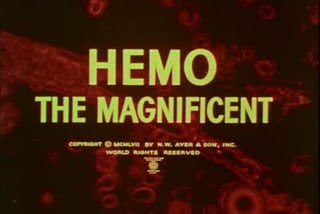 Bell Telephone was, in the Eisenhower-era, one of the largest media conglomerates on earth. When people spoke of "the phone company" they were referring to American Telephone & Telegraph, the parent company of Bell Telephone. Bell took seriously the need to bring shows of substance to the youngest members of the family.

To meet that goal, in 1957, A.T.&T, and its advertising agency N.W. AYER, commissioned THE BELL LABORATORY SCIENCE SERIES.

Produced by some of the most accomplished filmmakers ever to work in television, including Frank Capra and Walt Disney, each of the seven episodes made between 1957 and 1962 were hosted by a gifted and engaging academic, U.S.C.'s , Dr. Frank Baxter. 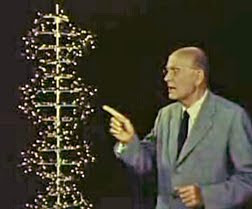 He was supported by a cadre of cartoon characters, who were, metaphorically, cut from the same cloth as the legendary MUPPETS: equal parts fun , fantasy and fact.

In a vibrant mix of live action and animation, each show explored single topics in science and humanities.Even, then, it evoked a campy quality.

The programs gave young viewers an insightful, yet entertaining look at the human circulatory system, the secrets of weather, a history of time, a lesson on the origin of language and more. An eighth episode,produced in 1964, starring Walt Disney, explored the world's oceans.

For those of us who saw these films on television and again in classrooms, it was an entertaining way to learn.Viewed today, it offers a crystalline window into the innocence of television's nascent years.

Here from the PANSKEPTIC YOU TUBE site, if the opening segment of 1957's HEMO THE MAGNIFICENT, from THE BELL LABORATORY SCIENCE SERIES, Enjoy!!!!!

It was a tiny screen that enlarged America's worldview.

Commercial Television broadcasting finally came to life with the economic boom that occurred in the years following World War II.

Stations were licensed and went on the air as rationed materials needed for military defense were released by the federal government to companies like RCA, Admiral,Westingouse. They , in turn, designed and manufactured the first generation of home, television receivers.

These early, black & white, TV sets cost the average consumer $300 to $400 each , at a time when a new Ford sedan cost about $1500. Yet, across the nation , TV antennas went up on roofs in communities,both big and small.Some sets even had a built-in antenna. 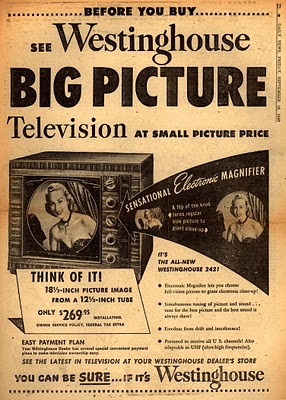 Audio was low and tinny, the picture was often fuzzy and occasionally rolled and screens on these first sets often maxed out at a diagonal measurement of 12 inches.

But, one clever company, Westinghouse, found a way to enlarge the image without making a physical change in your tv set.

Here , from the trabajopublicau you tube site, is a LIVE, 1949 commercial from CBS-TV's STUDIO ONE,introducing this extraordinary innovation THE EXCLUSIVE ELECTRONIC MAGNIFIER.Enjoy!!!!! 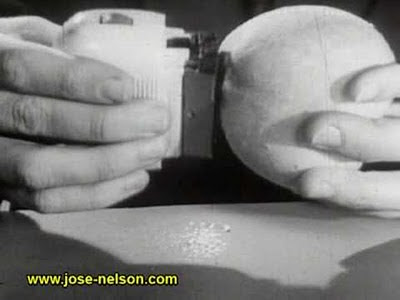 If you think you need a mini-machete with 11 blades that you have to drag across your stubble, after you slather on 28 ounces of viscous gel that smells like industrial grade potpourri,to get a clean, close shave, then check out this commercial from one of the first companies to manufacture electric shavers, Remington Rand.

Yep. That Remington Rand.The same technological titans who developed the UNIVAC computer system, which helped the Strategic Air Command scan the skies for Soviet satellites during the early days of the cold war.

This LIVE, black and white ad ran on CBS-TV's venerable, Sunday night quiz program, WHAT'S MY LINE in the mid-1950's.Remington's sonorous, commercial spokesman,Dick Stark, not only extols the virtues of a dry shave from a device that harvests your facial hair with "diamond-honed blades," but shows how close a shave you'll get by shearing the fuzz off of peach.

All that, plus an extravagant $7.50 rebate , if you trade in your old shaver.

What more could you ask from a giant computer company that apparently dedicated itself giving you a smooth face by ,first, man-scaping your mid-afternoon snack?

Here, from the MATT THE SAIYAN TUBE site, is a convincing clip about about an electric clipper.Enjoy!!!!