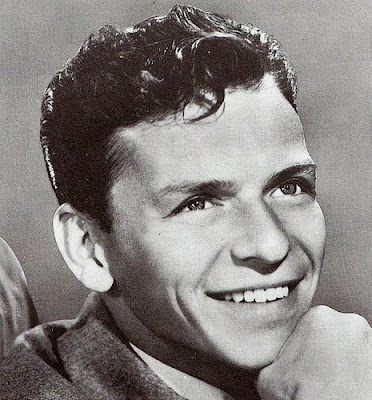 Francis Albert Sinatra ( aka OLD BLUE EYES ) may have rekindled a flagging career with a series of NBC Specials in the mid-1960's, but YOUNG BLUE EYES ( aka THE VOICE ) had long been crowned King of the Bobby-Soxers, when he and two other Post WWII singing idols, Perry Como and Frankie Laine, joined together for a 1951 music & comedy special on the nascent CBS-TV network.

These three, storied performers were everything in the era of 45RPM records,sheet music & LIVE stage shows, that Justin Timberlake,Jay-Z & Usher are to the contemporary world of digitally-downloaded music.

Even then, the talented and tempestuous Sinatra was the platinum standard against which all male, pop singers were judged. 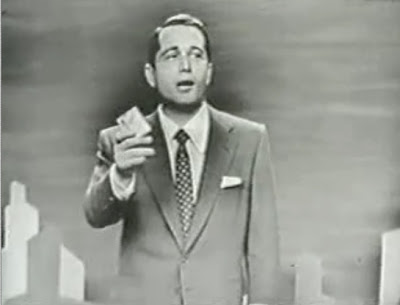 Perry Como was introduced to the world as a the singing barber from Cannonsburg,Pennsylvania. By the time this Sinatra show was telecast, he was an established recording, radio & television star. Frankie Laine was a headliner in nightclubs, and a star on radio & records. He would,later, record the hit theme for CBS-TV's RAWHIDE. 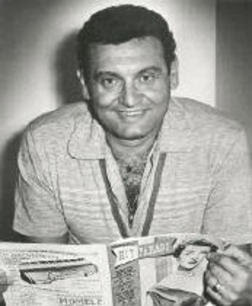 The B&W excerpt is sterling example of the primitive, but adventurous nature of early, network television. The premise of the show, like the sets, is a but flimsy, but all in good fun. High spirits and high energy compensate for the austere technology

The rare clip posted below, from the MARKALSON1938, YOU TUBE site, showcases the trio's manifold musical talents , the kind of music that filled the pop charts as Amercians fought in the Korean War and the rowdy dynamic that powered their personal friendships. It's clear they were stars in ascent and that they savored the moments they shared with their fans and with each other. Enjoy!!!!! 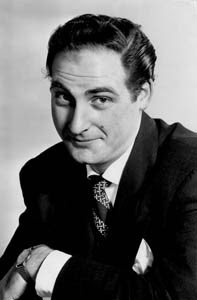 As a performer and comedian, Sid Caesar was made for television, even if the tiny screens of first generation receivers could barely contain his vivid talent and vibrant energy.

On January 26, 1949, Caesar proved himself to be the brightest light visible at the dawn of network television. His first TV series, THE ADMIRAL BROADWAY REVUE, was simulcast on NBC-TV and the DUMONT NETWORK for maximum, audience reach.

It was one of television's first success stories.

Caesar, a Yonkers, New York native and a skilled saxophonist,came to television as a veteran of camp shows in the Catskill Mountains, ,military musicals during his time serving in the U.S. Coast Guard, and as a lead player in the hit, Broadway show, MAKE MINE MANHATTAN.In that energetic revue, Caesar won critical acclaim for his star turn, performing a musical spoof of date night in Little Old New York.

So, in the final months of the 1940's, the small handful of network television viewers were treated to the debut of the nascent mediums first, true comic virtuoso. 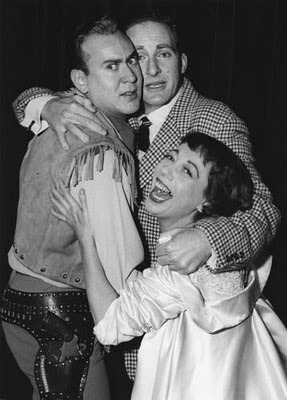 Sid Caesar would achieve Olympian heights in a long and storied career in television comedy. He went on to star with Imogene Coca and Carl Reiner in YOUR SHOW OF SHOWS and with Nanette Fabray in CAESAR'S HOUR. He gathered a legendary writing team (see below) that included icons of comedy such as Mel Brooks,Larry Gelbart and Neil Simon. 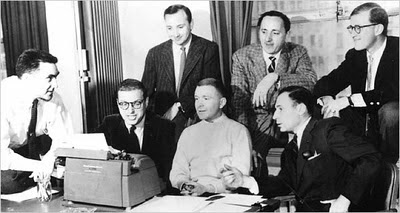 Below, from the JSTEEBER, YOU TUBE site, is a primitive clip of Sid Caesar performing his high energy, high velocity number, FIVE DOLLAR DATE, on the debut of THE ADMIRAL BROADWAY REVUE. Enjoy!!!!!!

WHEN THE KING OF LATENIGHT WAS A DAYTIME JESTER - CLASSIC CLIPS OF JOHNNY CARSON IN "DO YOU TRUST YOUR WIFE?" - ABC-TV - CIRCA 1958 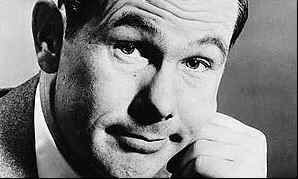 Before Johnny Carson ascended to become show business royalty, as host of THE TONIGHT SHOW on NBC-TV, and before he was a princely portender for the Jack Paar's, late night throne, the easy-going, young, Nebraska native hosted a low budget, high energy ,daytime game show , called DO YOU TRUST YOUR WIFE? on the ,then-struggling, ABC-TV network.

An engaging combination of quiz , stunts and comedy , the 30 minute, B&W show, which was originally hosted by the legendary ventriloquist Edgar Bergen, along with his shellacked sidekicks, Charlie McCarthy and Mortimer Snerd, had a 14 month, prime time run on CBS-TV, during the mid-1950's.

Executives at ABC-TV, desperate to enhance its spartan daytime schedule, rescued the show. They hired another castaway from the Tiffany network, mischievous comedian Johnny Carson, whose variety program had just been cancelled, to host.

The move from prime time to daytime tested Carson's fiber as a performer and may have tarnished his showbiz persona.In those times, the move from night to day was viewed as a free-fall from TV grace.

And while announcer Bill Nimmo is featured in the episode we've posted below, it was during Carson's five year run as host and resident laugh maker of this show, which was later rechristened WHO DO YOU TRUST?, that he first met, hired and worked with his longtime comedic foil, the late Ed McMahon.

As he scored laughs interviewing an eclectic array of eccentric contestants and doing daring comic demonstrations, Carson gained recognition as a skilled master of ceremonies and as a versatile host.

The show grew a larger audience as viewers discovered Carson's wit and charm.

DO YOU TRUST YOUR WIFE? became a steady and successful component of the ABC-TV's burgeoning, youth oriented, afternoon line-up.Adjacent shows on the schedule included AMERICAN BANDSTAND, broadcast LIVE from Philadelphia's WFIL-TV, with Dick Clark and THE MICKEY MOUSE CLUB, shot on film at Walt Disney's Burbank lot. 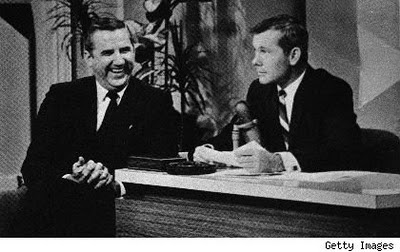 In 1962, as Jack Paar left his late night, NBC-TV time slot for a Friday evening variety show on the THE PEACOCK NETWORK, NBC executives recruited Carson and sidekick Ed McMahon to take over THE TONIGHT SHOW.

They were a fixture of NBC's late night line-up for 30 years.

Here, from the HWY61MEDIA, you tube site, are four clips that constitute one episode of DO YOU TRUST YOUR WIFE? with Johnny Carson.Enjoy!!!!!

BONUS CLIP
Here, from the HOLLYWOODCLASSICS 7, YOU TUBE site is an excerpt of the 1956, CBS-TV, prime time edition of DO YOU TRUST YOUR WIFE with Edgar Bergen.Enjoy!!!!!

Posted by PAGEONE at 8:23 PM No comments: 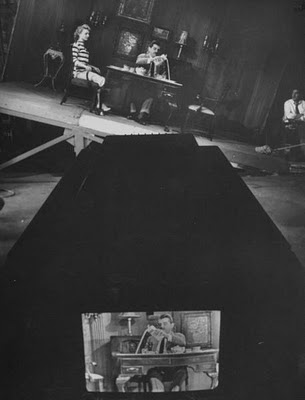 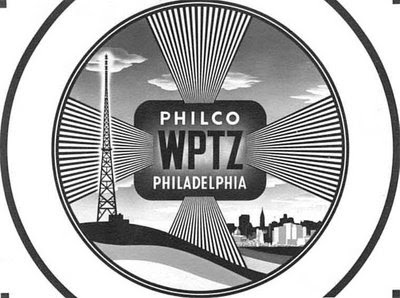 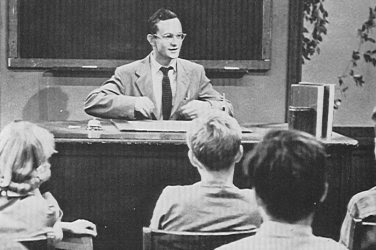 Long before the birth of educational television, one of the young medium's biggest shows featured a teacher and took place,largely, in a classroom.

But, NBC-TV's MR.PEEPERS was actually an early sitcom starring the eccentric and endearing Wally Cox as the slight and shy,junior high school science teacher, Robinson Peepers.

The 30 minute , B&W show, created by David Swift and produced by the legendary Fred Coe, was a low-key look at the comic adventures of a mild mannered educator living in small town America, during the post WWII years.

In this pilot, which was never broadcast, and in the subsequent, EMMY nominated series,Cox was surrounded by a talented and towering ensemble of NYC actors,including Patricia Benoit as his love interest,plus Tony Randall, Marion Lorne, and Jack Warden.

You'll notice a young Walter Matthau as the school's voluble coach in this episode. 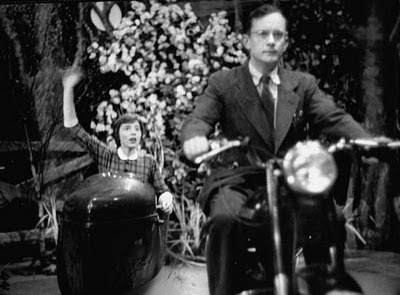 Many of MR. PEEPER'S Great scripts were provided by master comedy writers Everett Greenbaum and Jim Fritzell, who would,later, co-author some of THE ODD COUPLE's best episodes.

Production values may be primitive from a 2010 perspective,but were above average in television's infancy.

The gentle,classroom comedy ended its NBC-TV run on April 12,1955.

Wally Cox, a man of eclectic interests, including riding his motorcycle with friend and former roommate Marlon Brando, went on to a great career in television comedy, as did so many of his versatile cast mates.

Cox was a favorite on THE HOLLYWOOD SQUARES, and he was the voice of the animated,super pup, UNDERDOG.,also on NBC-TV. Cox did guest shots on a variety of primetime shows,including I SPY, THE BILL COSBY SHOW,MISSION:IMPOSSIBLE and more. 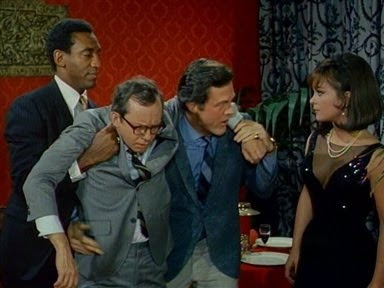 The four clips posted, below, are from the MICHELLE66 YOU TUBE SITE and constitute the 30 minute, unaired pilot film for the series.

This segment was produced LIVE at NBC's Century Theater in NYC without an audience and was captured with the NBC lenticular film method, better known as a kinescope.

As the episode was switched with LIVE cameras, the line feed, which would normally be the signal sent out to the network in a LIVE program, was ,instead,recorded on 16mm film.

That grainy, sparse recording preserved the performance, so network executives could repeatedly review the program.

Here is a nostalgic snapshot of nascent, network television,MR.PEEPERS from NBC-TV. Enjoy!!!!!