GENIUS IN LIVING COLOR - THE ENTIRE BROADCAST OF AN EVENING WITH FRED ASTAIRE - NBC-TV - CIRCA OCTOBER 17, 1958 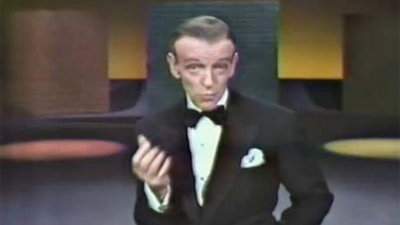 Fred Astaire was an incomparable performer.

He was also a video visionary.

The slim and stylish Astaire was a dazzling entertainer who helped define dance as an accessible art form for millions of fans. A vaudeville "song & dance man, " who won acclaim performing with his sister, the facile performer achieved stardom on Broadway, on Radio, on Records and on the Silver Screen.

The affable Astaire was one of the multi-talented performers who shaped MGM's musicals into the stuff of dreams for generations of moviegoers.

In the fall of 1958, he proved himself to be a television pioneer ,when along with choreographer Hermes Pan and Producer/Director Bud Yorkin(who in the 1970's, with partner Norman Lear, would revolutionize American situation comedy), Astaire offered a challenge to NBC-TV's, Burbank-based production and technical teams.

NBC programming executives asked him to star in a LIVING COLOR, music and dance special to air on October 17,1958.

The show was to be an NBC television event, entitled AN EVENING WITH FRED ASTAIRE and below, you can watch the entire program, sponsored by Chrysler Corpoation, in LIVING COLOR, thanks to YOU TUBE.

He could do it LIVE, as had been the practice since the birth of network television, or record it on a new technology with which the network and it's parent company, RCA, had been experimenting: COLOR VIDEOTAPE. 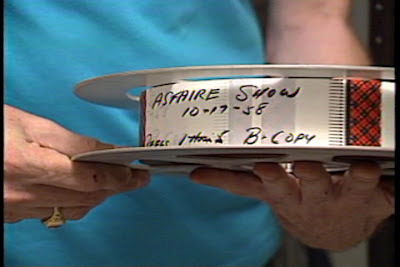 MONOCHROME VIDEOTAPE, developed by Ampex Laboratories with funding from performer Bing Crosby, made it's debut at CBS Television City in the mid-1950's. Production specialists viewed it as a utilitarian tool.

The TIFFANY NETWORK, used VIDEOTAPE to support it's news division. At CBS's Los Angeles facility, technicians would record DOUGLAS EDWARDS WITH THE NEWS, when it aired on the East Coast at 7:00pm eastern time, and replay it three hours later , to the Western leg of the CBS Television Network, at 7:00pm Pacific Time.

No editing. No updating. Just the here to fore, impossible option of simply replaying a program, in tact, within hours to another timezone.

But Astaire and his colleagues wondered if COLOR VIDEOTAPE would allow them the latitude to produce their complexly structured program much like a film, so that sequences could be recorded in multiple "takes," until Astaire, a legendary perfectionist,was satisfied with the quality of the performance.

The production team, shooting with mid-1950's technology, including the enormous RCA TK-41 COLOR CAMERAS , which weighed hundreds of pounds, did an excellent job.

The result was exhilarating to the audience and to astonished television professionals, who came to realize that COLOR VIDEOTAPE was more than an early time shifting technology.Programmers and producers, alike, now viewed VIDEOTAPE as an efficient and economic production tool which allowed almost infinite creative options and would be key to any content preservation strategy.

This show was recorded on 2 inch wide, high band , color, reel to reel VIDEOTAPE, which had to be edited with a razor blade,a microscope and transparent,adhesive tape.Years later, it was preserved on a digital format.The exceptional quality of the program, as you are about to see, is striking.

The program garnered formidable ratings, glowing reviews, manifold awards for excellence and a commitment from the PEACOCK NETWORK for ANOTHER EVENING WITH FRED ASTAIRE.

Here, courtesy of the VOLTERRIFFIC YOU TUBE site, is AN EVENING WITH FRED ASTAIRE in its entirety, including commercials from sponsor Chrysler Corporation, during which announcer Art Gilmore introduces the 1959 line of new cars " with the Forward Look. " Enjoy!!!!

Posted by PAGEONE at 7:19 PM No comments: 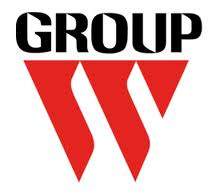 Having spent many years of my professional life in the service of the Blood Red "W" (aka GROUP W , WESTINGHOUSE BROADCASTING COMPANY), I was privileged to be an eyewitness to the growth and development of one of the most successful radio stations on earth, Philadelphia's KYW NEWSRADIO 1060.

KYW TV & RADIO came to Philly on June 19th, 1965 as part of a station trade with rival NBC. How NBC forced Westinghouse to switch stations in the mid-1950's is another story for another day ( or two !!:).

KYW premiered the all-news radio format in Philadelphia on September 21st, 1965. And,as they still say on air, The Newswatch Never Stops on KYW NEWSRADIO 1060.Today, KYW is a CBS Owned and Operated Radio station and is still the dominant force in local, radio news.

Here is a flight of classic promos for KYW and it's sister,NEWSRADIO outlets, KFWB98 in Los Angeles and 1010WINS in NYC. Enjoy!!! 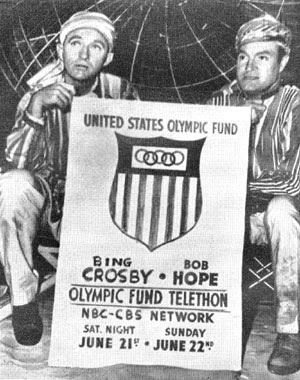 As the clock counts down to the 2012 Summer Olympics in London,KINESCOPE HD flashes back to 1952, as amateur athletes from across this country trained to compete in the Games of the XV Olympiad in Helsinki. Finland.

In one of the television's earliest, and most successful, fundraising efforts, an all-star, coast-to-coast telethon was produced in living monochrome to help support the USA team's bid for the gold.

Simulcast on NBC AND CBS, and originating LIVE from the EL Capitan Theater in Hollywood, the variety rewiew was hosted by the two biggest stars in comedy and music, Bob Hope and Bing Crosby.

This night marked Bing Crosby's television debut, but the evening... and the audience... belonged to the tumultuous young comedy team that exploded onto the stage, that night.The dapper pair made their reputation in night clubs, but were just starting conquer radio , television and films. In a few short months, they would achieve a rare status in show business: global domination. 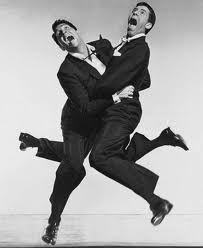 The performance captured in this clip, from the SOAPBOXPROD YOU TUBE site, can only begin to show the high velocity, high voltage,manic comedy that brought them iconic status in American entertainment.

Posted by PAGEONE at 8:33 PM No comments: