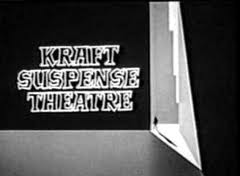 KRAFT SUSPENSE THEATER on NBC-TV, from 1963-1965 was an archetypal production of ,what was then , Hollywood's largest television assembly line, UNIVERSAL CITY STUDIOS.

It was a weekly, hour-long, dramatic anthology that was pre-empted once a month for PERRY COMO'S KRAFT MUSIC HALL, but the series fulfilled a more important role for, both, the studio and the network , acting as an incubator in which to cultivate pilots for potential new series.

Not many made it past  their initial airing.

Of the 59 episodes which were produced, in the end, only one episode spawned a series on the NBC schedule, RUN FOR YOUR LIFE with Ben Gazzarra.

Like so many efforts of an eclectic nature, some editions of the show offered engrossing television, while some were simply, passable, prime-time fare. 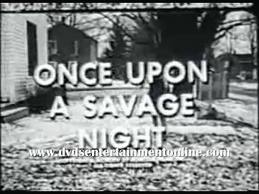 One outing that distinguished itself, was the April 2, 1964 episode, entitled ONCE UPON A SAVAGE NIGHT.

Designed to be a pilot for a police drama, it was a taut, vibrant , life and death, race against the clock set in Chicago.

Unlike so many of the stories produced for the show, this episode was shot on location in the Windy City.

Like so many editions of KRAFT SUSPENSE THEATER, it was crafted by talented people as the genesis of their careers, who would go on to fame in feature films.

The series theme was composed by a young staffer in  the studios music department named John Williams. He would , years later, find his success scoring a movie set in a galaxy far, far away from UNIVERSAL CITY.

The surprise is that the director was ROBERT ALTMAN!! Yes , that Robert Altman, who like Steven Spielberg was learning his craft directing, weekly episodic television on the stages of  the UNIVERSAL LOT.

Here, from the GR160289 is KRAFT SUSPENSE THEATER'S production of ONCE UPON A SAVAGE NIGHT. 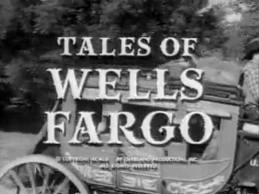 On the three major networks, Cowboys rode the  21- inch range,  the law of that land was enforced by a solitary, stoic hero with a Colt .45 loaded with blanks and the Old West was only as big as the Universal back lot.

One of the most popular shows of TV's halcyon Era was NBC-TV's TALES OF WELLS FARGO.

Westerns may have resonated with the post-war audience and their baby-boomer children because it depicted  a weekly morality play in glorious monochrome.

A battle between good and evil unfolding against the rustic canvas of  the American Prairie. 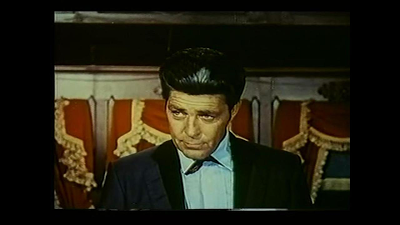 Starring the courtly Dale Robertson,and sponsored by such iconic brands as Pall Mall Cigarettes and GM's Buick Motorcar Division, this two-fisted adventure portrayed the daring cases of Jim Hardie, an agent of the Wells Fargo Company.

Train robberies, stage coach chases, barroom brawls and  romance with mysterious beauties were the stuff that propelled TALES OF WELLS FARGO to the top of the ratings.

As LIVING COLOR became more important to NBC and it's parent, COLOR-TV manufacturer, RCA, TALES OF WELLS FARGO expanded to an hour-long COLORCAST for it's final seasons.

Robertson became one of television's most bankable stars and never strayed far from the Western genre, going on to play the lead in ABC-TV'S THE IRON HORSE (1966-67).

Here, from the THE VIDEO PRISMS YOU TUBE SITE, is the December 2, 1961  episode of TALES OF WELLS FARGO, IN LIVING COLOR.