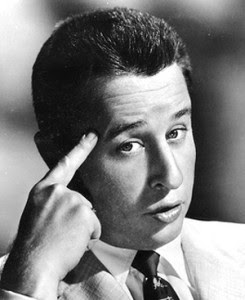 "I'VE NEVER BEEN DRUNK, BUT I'VE OFTEN BEEN OVER-SERVED."

"DID YOU EVER GET THE FEELING THAT THE WHOLE WORLD WAS A TUXEDO AND YOU WERE A PAIR OF BROWN SHOWS?"

"IF IT WEREN'T FOR ELECTRICITY, WE'D ALL BE WATCHING TELEVISION BY CANDLELIGHT."


George Gobel was the antithesis of a 1950's television laugh maker. Low key and self-deprecating , he distinguished himself from comic, video colleagues ,like brash Milton Berle and garrulous Jackie Gleason, with high impact, low key humor that was laser targeted at the viewer's frontal lobes , instead of blasting scatter gun gags in hopes of gut-level laughs.

Known to millions of television fans as "lonesome George," Gobel began his show business career as a child performer , singing , doing comedy & playing guitar. His biggest break came in 1954 when NBC-TV gave him his own, 30 minute, Saturday night,comedy-variety show.It was a smart and funny confection of stand-up,sketches,and music. His comic catch-phrase ," Well, I'll be a dirty bird," entered the national lexicon.Gobel won an Emmy for the program, which originated in Hollywood and which, eventually migrated to CBS-TV

On THE GEORGE GOBEL SHOW, Most story lines centered on his many failed attempts to assert himself in the face of his domineering wife, Spooky Old Alice, as played by actress Jeff Donnell. Counter to 1950's gender mores, his best friend on the show, was played by singer Peggy King. Ms. King, still performing and still vivacious, recently told me that her character's on-camera relationship led to much off-air confusion for some audience members, many of whom thought Lonesome George had a wife and a girlfriend, which was not the case.

Behind the cameras, over the years , Gobel benefited from the fast and furious talents of producer Hal Kanter(Julia, The Bob Hope Show),writer Norman Lear ( All In The Family, The Martin & Lewis Specials) and director Fred De Cordova ( The Jack Benny Program, The Tonight Show Starring Johnny Carson).

THE GEORGE GOBEL SHOW can also claim a small,but honorable, place in television techno-history. While still airing on NBC-TV, the network's parent company, RCA, experimentally produced one LIVING COLOR episode in a makeshift, stereo format.One channel of audio played on the NBC-TV network and the other channel of synchronized sound was distributed on the NBC Radio network. The audience was asked to pull a radio up next to a television set to get the full pseudo-stereo effect.

In the years following the program, Gobel's company,GOMALCO, co-produced LEAVE IT TO BEAVER, in partnership with Universal Studio's Revue division for CBS & ABC. He enjoyed a long run on the original HOLLYWOOD SQUARES and was a frequent guest on variety and talk shows. George Gobel passed away in 1991.

Below are thee clips from the dentelTV1 , You Tube site, that constitute one, 1954 episode of The George Gobel Show on NBC-TV . Enjoy!!!!!

KING OF THE ROAD: BEAT GENERATION AUTHOR, JACK KEROUAC, ON THE STEVE ALLEN SHOW - NBC-TV- CIRCA 1959 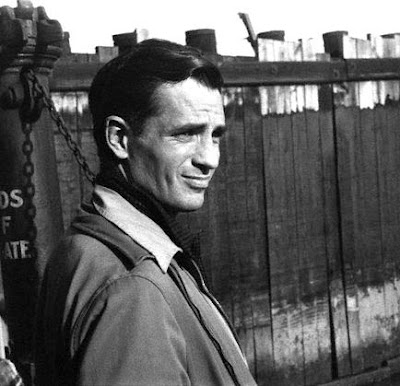 Jack Kerouac was not a typical, guest star on a 1950's network, variety show. Even on NBC-TV's eclectic and engaging Steve Allen Plymouth Show. He didn't sing, dance, tell jokes about his Mother-In-Law or spin flaming plates on bamboo poles above the terrified studio audience.

Yet, on one Monday night in 1959 , at 10pm eastern time, Allen, introduced, interviewed and accompanied the renowned, albeit slightly aloof, author during a rare television event

Like all exceptions to the ever-changing rules of television, there is a backstory.

In the early 1950's , an elegiac voice of despair and disenfranchisement quietly entered the American conversation. The dark and morose children of World War II who , in dour prose and pessimistic poetry,expressed their fears for a future incinerated by nuclear attack, decried rampant materialism and rejected long-accepted, social mores , came to be known as The Beat Generation.

A novel called "On The Road" served as their literary manifesto and life metaphor. Its author, Jack Kerouac, was their eccentric Templar.

Here , in LIVING COLOR, the author reads from his book with an intensity that offers insight into his passion for a life without societal constraints or modern contrivances.

In the clip posted below , from the 2lostbikes You Tube site, Kerouac , who died ten years later, in 1969, talks process and motivation with the erudite Allen and then he reads from his from his landmark literary work, while Allen provides the jazz piano accompaniment. Enjoy!!!!!


As a bonus, here is a CBC RETROBITE in which Kerouac defines the Beat Generation...with his eyes closed. Enjoy!!!!!

Posted by PAGEONE at 1:23 PM No comments: 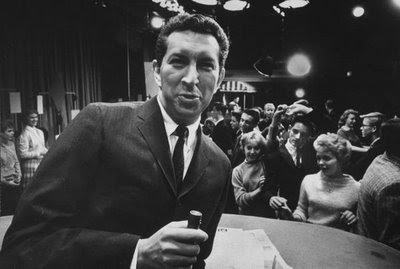 In the 1950's, Milt Grant was a rock and roll rebel and a radio renegade, becoming a top rated, Washington DC, disc jockey, early in his career. As host,creator and producer of The Milt Grant Show, a teenage dance party which aired seven days a week on Washington DC's WTTG-TV ( today's FOX 5 )from 1957 to 1961, he was the pied piper of the Pepsi generation.

Yet, to look or listen to Washington's top rock jock of the Eisenhower Era, you'd think he was a high school principal, an urbane banker or a 1950's sitcom father.Reserved, courtly, meticulously tailored, and sonorous, Grant wasn't trying to portray himself as one of the kids. He was a clear authority figure for teens in the Raleigh Hotel Ballroom, where Channel 5 produced the LIVE show, every day, and a proficient pitchman for their pals and their parents watching at home.

At one point in the late 1950's Grant's dance party was aired against the last part of ABC-TV's American Bandstand, hosted by video legend Dick Clark, and won in the local ratings. It had become the most watched, locally produced television show in the nation's capital. 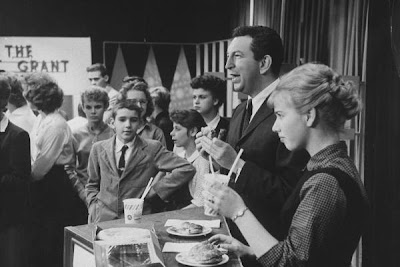 As Grant's adolescent audience moved on to college, his show was abruptly cancelled in 1961. But it was a new beginning for Grant who went on to create a syndicated radio series in 1964. Grant soon moved into television station ownership, when he launched independent, UHF station WWDC-TV in 1966.Grant later founded a television station group in major markets like Philadelphia and Miami, that earned him millions as an owner.

When he passed away, after a hard fought battle with cancer in 2007, he reportedly owned eight television stations, most affiliated with the FOX network.

Here's a link you can copy and paste in your browser to see video that clearly demonstrates Milt Grant's power of persuasion as a salesman in this kinescoped pitch to potential sponsors.

The post below is a clip that shows the manifold fruits of that sales pitch, a collection of commercials from THE MILT GRANT SHOW. Enjoy !!!!! 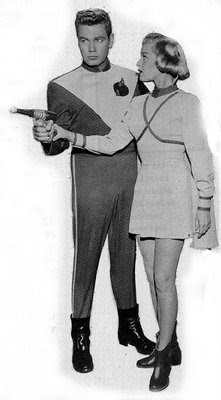 As the STAR TREK prequel from producer/director JJ Abrams debuts in theaters across America and racks up almost $80 million in its first weekend at the box office, here's a look back at one of television's first forays into rocket propelled, futuristic, science fiction, ROCKY JONES, SPACE RANGER.

Portrayed by stoic and stocky Richard Crane, ROCKY JONES , SPACE RANGER,was one of Captain Kirk's most wholesome and heroic progenitors.Jones was a rocket jockey who fought to protect the interests of Earth and peaceful planets throughout the galaxy , with the help of his rookie, co-pilot, cadet Winky, played by Scotty Beckett, and his love interest, the exotic Vena Ray, essayed by Sally Mansfield.

Debuting in 1953, 39 episodes of the syndicated,Black & White series were produced in Hollywood by independent film tyro, Roland Reed. Most were directed by veteran, televisionary Hollingsworth Morse.While Rocky's intergalactic ride,the Orbit Jet , was no Starship Enterprise, it reflected state of the art rocketry for the 1950's,The primitive special effects leave a lot to be desired. The stories were light on science and emphasized action amid the asteroids.Still good fun in the rear Atomic Astro Teleview-Scope:)

Here is an excerpt from an early episode.Enjoy!!!!!! 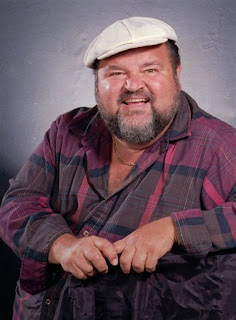 Dom DeLuise was the son of a NYC trash man , an accomplished chef and one of the funniest performers ever to grace Broadway,prime time television or the silver screen.

He passed away today after a long battle with an undisclosed illness.

Overweight, yet physical and dynamic in pursuit of laughs, DeLuise was a custom, comedic foil for Dean Martin, a deft sidekick for Burt Reynolds , an inspired, insane, co-conspirator for Mel Brooks and a hilarious occupant of Johnny Carson's couch on the TONIGHT SHOW.

Below are two clips that stand as tribute to his formidable talents.

First, is a clip of his debut on NBC-TV's THE DEAN MARTIN SHOW.Enjoy!!!!!

Here, posted below, is a riotous clip from a hilarious, and seemingly spontaneous,TONIGHT SHOW bit spinning wildly out of control. Enjoy!!!!!

Posted by PAGEONE at 8:44 PM No comments:

In this so-called UPFRONT SEASON , when the television industry introduces new programs in its struggle to retain audience, and offers up new pricing strategies to recruit advertisers, while hoping to grow revenue, here is a nostalgic look back.

In 1977, for most American communities, cable was a utility , not a programming option.Home video recording was not yet a pervasive entertainment option and was still a few years from being affordable for, and available to ,most consumers. Home computing and the Internet weren't quite there, yet. Radio and records were doing fine. Movies studios were trying to top their own blockbusters, like The GODFATHER. For millions of people, the least expensive and most readily available entertainment option was television.