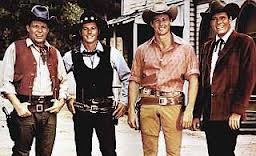 Especially the gunslingers who could fire off one liners with the same speed and accuracy as a six-gun.

From Hopalong Cassidy and Hoss Cartwight to Bat Masterson and  Bret Maverick  we like our gunsmoke tinged with giggles.

In the mid to late 1960's, as the nation faced what was ,perhaps, the greatest social upheaval since the Civil War, TV audiences rode off to the Old West in search of escape.

Shows like BONANZA, GUNSMOKE and THE BIG VALLEY offered a  rare respite from the daily angst of American life, as portrayed on Network News.

At NBC, there was a sense that viewers wanted a Western that offered cowpokes who could lasso big laughs between barroom brawls.

And so was born LAREDO, a fast, furious, funny , two fisted Old West adventure, focusing on a quartet of Texas Rangers, who were wrangled by their long-suffering Captain.

Neville Brand, who made his reputation playing Al Capone on THE UNTOUCHABLES, evidenced a great gift for comedy, starring along with  Peter Brown, William
Smith and Phillip Carey as their Captain.

Produced by  UNIVERSAL STUDIOS  and RONCOM FILMS , LAREDO was spun off on NBC-TV from its long running hit, THE VIRGINIAN.

The LIVING COLOR series lasted only two seasons, and didn't have enough episodes to meet the threshold for successful syndication. But it leaves a great legacy in action and laughter.

Here from the MORERADIOFILM AND TV YOU TUBE SITE,  here is the November 4, 1965 episode of LAREDO, entitled THE GOLDEN TRAIL.