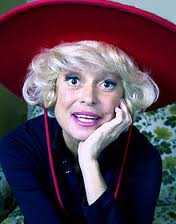 One of the brightest lights on Broadway, while truly incandescent, doesn't shine from the marquee of a theatre, but radiates an electrifying and exuberant brilliance while standing at center stage.

Her name is Carol Channing and she is the 91 year old subject of an engaging and entertaining documentary on SHOWTIME called CAROL CHANNING:LARGER THAN LIFE.

While always a vibrant presence on screens , both large and small, the theater is her native habitat and she is the benevolent mistress of her domain.

One of her earliest and most enduring theatrical successes was her starring role as Lorelei a gold digger with a heart ... and hair ...of platinum in the 1949 stage version of GENTLEMEN PREFER BLONDES,by Anita Loos and Joseph Fields.

This role was the defining portrayal of her early career, while her kinetic starring role in 1964's Broadway production of David Merrick's Hello Dolly has shaped her image,ever since.

Here, from the MATTTHESAIYAN YOU TUBE site, is an excerpt from a 1954 edition of NBC's BUICK-BERLE SHOW,in which Carol Channing performs two of her show stopping numbers from GENTLEMEN PREFER BLONDES. 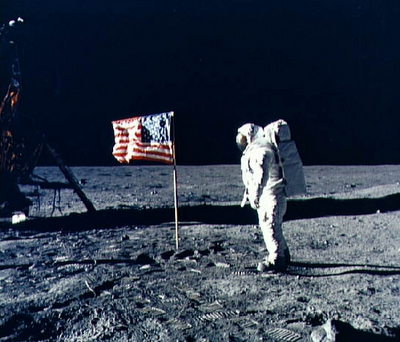 At least once in Television history, you could honestly say that THE WHOLE WORLD WAS WATCHING.

In the summer of 1969, it seemed that the whole world was coming apart.

It took a true flight of fantasy to bring billions of people on Earth together, if only for a brief and sublime moment.

Yet, when three American astronauts, Neil Armstrong, Edwin 'Buzz" Aldrin and Michael Collins,were sealed in the compact Apollo 11 spacecraft, they carried with them the hopes of a tired and tormented people, who needed an epic demonstartion of human ingenuity to restore their faith in America and in themselves.

The men who flew through space on the Apollo 11 mission were fulfilling the promise of a martyred President, validating the vision of thousands of aerospace professionals, setting a new standard for American exceptionalism and achieving a dream that had eluded human beings since the dawn of life on this planet.

It was a landmark night for television,as well, which allowed people all over the globe to share the most daring adventure in recorded history. In America, the NBC, CBS and ABC networks also naviaged the night sky to bring home the story of MAN ON THE MOON.

Here, posted below, from the WDTVLIVE42 You Tube site, is a documentary produce by NASA, the National Aeronautics And Space Administration,to chronicle humanity's
most amazing journey. Enjoy!!! 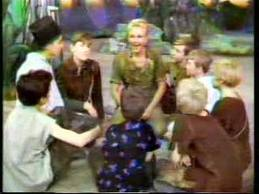 There are moments in television that defy description.

They are simply sublime in execution and satisfying to watch.

Even in a high velocity medium like TV, sometimes it's best to let the story ,the music, the production values and the performances stand on their own.

I think that's true in the case of NBC-TV's vaunted, vibrant,1960 presentation of PETER PAN.

This was the Peacock Network's second time bringing Sir James M. Barrie's classic tale to a mass, television audience, having first staged it in 1954, to wide acclaim.

Posted below, from the MJC545 YOU TUBE site, is a lofty and lively production that starred Mary Martin as Peter and Cyril Ritchard as the villainous Captain Hook.

It was staged on Broadway and for NBC by Jerome Robbins, while it was Directed by Vincent J. Donohue.

This production is evocative and entertaining, and that may the best we can ask of network television, even today.

A DEATH IN MAYBERRY - THE PASSING OF ANDY GRIFFITH 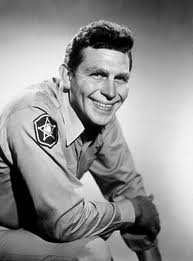 The kind, quaint town of Mayberry was more a mindset than a place for many of us who grew up in the big cities that were rocked by the social upheaval of the turbulent 1960's.

We knew there wasn't really a Mayberry, but we hoped that it could be real.

The death of video virtuoso Andy Griffith , at age 86, gave many of pause to recall and relish his extarordinary legacy in television, films,recording and music.

It also reminded us that Griffith, along with televisionary executive Sheldon Leonard, uber-producer Aaron Ruben and some of the medium's most accomplished and proflific comedy writers, created a place of safety and sanity, that like a bucolic Brigadoon, only existed on your 21 inch Magnavox every Monday night on CBS.

THE ANDY GRIFFITH SHOW ran on the TIFFANY NETWORK from 1960 to 1968 and routinely was the most watched sitcom on television. It offered simple,human tales of small town life, that were usually solved in 22 minutes, plus titles and commercials, by the moral and methodical Sheriff Andy Taylor. 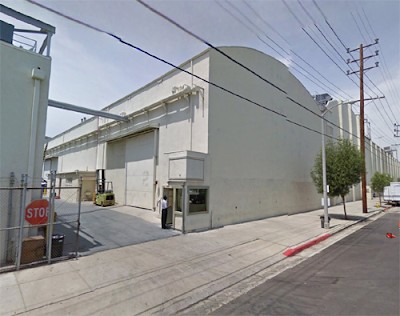 As you would imagine, the key to this kind of gentle comedy is hard work.

While the fabric of the nation was tested in the 1960's, in the writer's room, on Stages 1 & 2 at Desilu-Cahuenga and on Desilu's, Culver City Back Lot, a sweet, funny tapestry of rural American life was being expertly woven.

Here,in an interview done some years back for the vast and voluble ARCHIVE OF AMERICAN TELEVISION, Griffith explains the attendtion to character and storline that helped to make THE ANDY GRIFFITH SHOW an American Television Classic.

Long before Lt. Columbo donned a wrinkled trenchcoat while methodically trapping monied murderers in Los Angeles, decades before Detective Lenny Briscoe persistenly solved crimes on the streets of Manahttan, and years before Five-O's Steve McGarret nabbed Hawaii's most wanted with a steely combination of foresight and firepower,a henpacked homicide specialist was bringing down bad guys with steadfast police work and self-deprecating humor.

ROCKY KING,DETECTIVE, starred the venerable and verstaile film actor Roscoe Karns,as a big city cop, who threw more punchlines than punches, in wry, self-referential tales of murder with a side serving of marital mayhem. 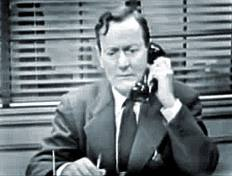 The show, which ran from 1950 to 1954, was a staple of the innovative, if impoverished, DUMONT Network schedule, airing LIVE on Sunday nights from 9 to 10Pm Eastern time. The show garned respectable ratings in the face of CBS's Sunday night powerhouse, GENERAL ELECTRIC THEATER, hosted by Ronald Reagan.

You'll note that in moments where other cop dramas belabor plot points, Rocky King would detour to a confab between the world-weary detective and his ditzy wife, Mable, who was never seen on camera.

The technical and creative staff improvised in the face of limited facilites and low budgets to create a satisfying and engaging crime story with comic overtones.

Here, from the FOXEEMA YOU TUBE site is a 1952 edition of DUMONT network's ROCKY KING, DETECTIVE. Enjoy!!!!!!!!